Ole Gunnar Solskjaer is sweating over the fitness of key players ahead of tomorrow’s crunch Premier League clash with Chelsea at Stamford Bridge.

Juan Mata, Paul Pogba, Hannibal Mejbri and Phil Jones are definitely ruled out and Dan James, Scott McTominay, Edinson Cavani and Donny van de Beek could join them.
It is a game where the manager will pick his strongest available eleven, so if Cavani and McTominay are fit, they will almost certainly start.
Despite the excellent form of Eric Bailly and Dean Henderson in the two legs against Real Sociedad, the boss seems to retain more faith in David de Gea and the Harry Maguire–Victor Lindelof centre-back partnership, so we expect them to be reunited for the trip to London.
There is a possibility that Solskjaer will go with three at the back and include Bailly as well. This was a common tactic last season in big away games, but he has only employed it twice this term – against PSG and RB Leipzig – with the latter potentially having deterred him from ever trying it again. So on balance we think he’ll stick with 4-2-3-1.
Mason Greenwood should get the nod ahead of Anthony Martial as the fourth attacker alongside Cavani, Marcus Rashford and Bruno Fernandes. If Cavani doesn’t recover in time, Anthony Martial’s form has been so bad that he will probably not replace him. Other options are to push either Rashford or Greenwood up top and bring in Dan James (if he himself has recovered) or Amad on the left or right wing, or to go with that three at the back discussed above, with Rashford and Greenwood as twin strikers and Shaw and Wan-Bissaka providing the width. 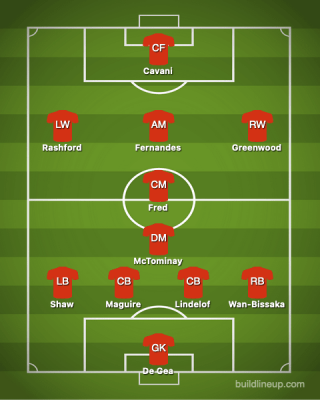