Ole Gunnar Solskjaer has come in for a lot of criticism from fans for persistently selecting an off-form Anthony Martial this season. Questions have also been asked as to why United waited nine months to sign Edinson Cavani when he could have been added to the ranks in last January’s transfer window instead of Odion Ighalo.

However, there is a creeping realisation that one of the main reservations back then – Cavani’s injury record – was actually a very good reason to be wary and is becoming a problem as we cut into the meat of the 2020/21 season.

If we look at Cavani’s record over the last two years, there is only one instance where he goes two months without injury – October and November 2019. The other gaps in the record include the two off-seasons and the Covid-19 lockdown. 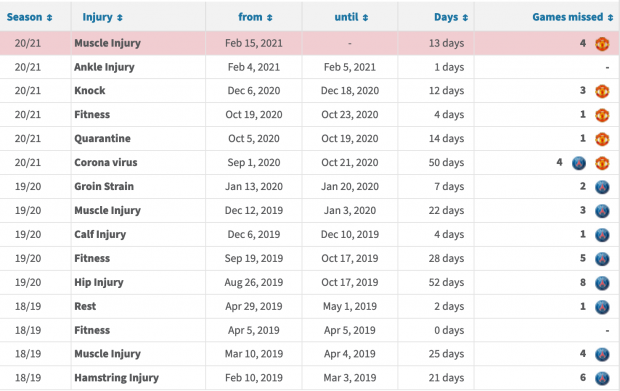 The Uruguayan has already had five separate injuries at United – plus the initial Covid-19 quarantine and an admittedly unfortunate three-match ban for his social media faux-pas – and is now on the treatment table again. He picked up a knock in training that Solskjaer seemed to think would be shaken off quickly, but which has seen him miss four games already – and he has yet to even resume training. It is looking likely that such an innocuous knock will result in at least six games being missed.

The 34-year-old’s propensity to pick up injuries might not have been such a problem had Martial continued his fine form of 2019/20. Most people assumed that the Frenchman would spearhead the United attack this season and that Cavani would be used rotationally and/or as an impact sub. But because of Martial’s poor performances, he has made himself the first choice centre-forward of the United side and now his absences are felt strongly because there is little by way of an alternative.

This is why Solskjaer has been doing right by continuing to push Martial to play through his bad patch and regain his form. The manager knows that he needs to be firing, because Cavani – or his body – simply won’t be able to take the strain of leading United’s line to the end of the season.

There are alternatives, of course. Marcus Rashford has plenty of experience as a centre forward but has proven to be a more effective weapon on the left wing. Mason Greenwood is a natural centre forward but is still a teenager, still perhaps physically not at a robust enough level for the role and has scant experience of playing up top at Premier League level. The next generation of youngsters – the likes of Joe Hugill and Charlie McNeill – are tremendously exciting but far from ready. The fact is that there is no backup.

A formation change could provide the answer. Rashford and Greenwood could play as twin strikers, but this would require a shift in formation to 3-5-2, with the full-backs providing the width. 4-4-2 would not work without Bruno Fernandes being pushed out to a wing or deeper into midfield, neither of which the boss is likely to want to do.

So, in all likelihood, Martial will lead the line today at Stamford Bridge and Solskjaer will just hope, again, that something in the Frenchman’s brain clicks and he starts to fire again. That is United’s best chance of resolving the problem and, presumably, the reason that the manager is selecting him so persistently despite his abject performances.

‘Anthony knows what we want, and he is working really hard to do well for the team and that’s what is pleasing me the most when I see him every day in training,’ Solskjaer said ahead of today’s game.

‘He is not going to sit down and wait for things to happen, he knows he will have to make it happen himself and we encourage him, we coach him, and we know he has going this quality and class.

‘Everyone goes through difficult patches from time to time and I think we saw again tonight, he is working hard and that is the main thing.’