Home » Dan James or Mason Greenwood – who will Solskjaer pick vs Crystal Palace?

Dan James or Mason Greenwood – who will Solskjaer pick vs Crystal Palace?

Edinson Cavani is back in training and Ole Gunnar Solskjaer hopes he will be fit to take part in Manchester United’s Premier League clash with Crystal Palace at Selhurst Park tomorrow.

With the Red Devils having failed to score in their last two matches, the boss is almost sure to bring the Uruguayan straight back into the starting line-up to try to get them firing again.

This will almost certainly mean either Mason Greenwood or Dan James making way. The boss seems to be a big fan of the Welshman, so he could be the one to keep his place.

Elsewhere, with the season’s most difficult fixture looming on Sunday – an away trip to face Manchester City at the Etihad, Fred could be rested in midfield with Donny van de Beek given a rare opportunity to show what he can do.

Solskjaer has plenty of other options for rotating if he is concerned about fresh legs. Dean Henderson could and should get another shot in goal and it is also possible that Luke Shaw will be rested, with Alex Telles a more than capable stand-in. Eric Bailly could also be rotated with Victor Lindelof.

However, we think it is likely that the manager will not want to make too many changes. Three points are vital to keep momentum going and stay clear of the chasing pack in second place and so we don’t think he will deviate too much from what he feels is his strongest side. 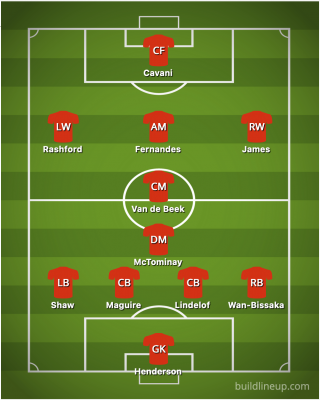 Anthony Elanga and Alex Telles in squad to...