Ole Gunnar Solskjaer may be tempted to change to a three-at-the-back formation as United face high-flying Manchester City at the Etihad tomorrow.

Dean Henderson is set to retain his place in goal as David de Gea has been allowed to go to Spain on paternity leave following the birth of his baby daughter. If the manager has any concerns about putting too much pressure on the young Englishman, having the extra centre-back might be an appealing idea.

The formation could also allow Solskjaer to resolve what has become a problem of late, and that is scoring goals.

While on the surface of it, changing to a more defensive formation should not help in that department, it would shake things up in attack, allow there to be two strikers rather than one and allow Luke Shaw, who has created the third most chances of any player in all of Europe’s top leagues this season, to get forward more without leaving United too exposed at the back.

Eric Bailly has been performing well in defence and Solskjaer remains loyal to Victor Lindelof so he will be confident to select them both alongside Harry Maguire.

Assuming Marcus Rashford and Edinson Cavani are the front two and Bruno Fernandes plays behind them, the issue then would be who would occupy the two other midfield berths. ‘McFred’ – Scott McTominay and Fred is the likely choice. They are not the most creative options Solskjaer has in his squad, but with Paul Pogba absent and Donny van de Beek struggling for fitness, there is not a great deal of alternative at the moment.

If Solskjaer does adopt this formation – something he has not attempted since it failed badly in Leipzig to see United crash out of the Champions League – then one of McFred will be given licence to get forward and join the attack and Aaron Wan-Bissaka will be expected to contribute a lot more offensively from the right wing-back position than he normally does. 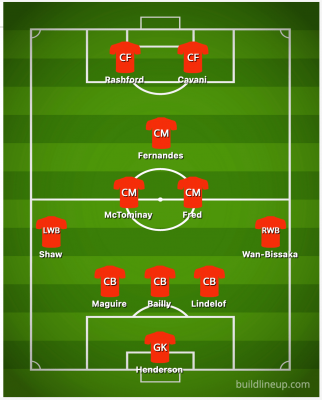