Home » Predicted XI vs AC Milan: Three changes from the side that won the derby

Predicted XI vs AC Milan: Three changes from the side that won the derby

AC Milan visit Old Trafford tomorrow in the first leg of the Europa League Round of 16.

With Rashford’s scan revealing nothing sinister in the ankle injury sustained against City at the weekend, he will probably make it. Solskjaer would probably pick him on crutches right now, especially with Anthony Martial enduring a goal drought. Edinson Cavani is starting to miss more and more games through injury amidst reports he is unhappy in England and wants to leave the club at the end of the season.

Assuming Rashford and Martial are fit and Cavani isn’t, that leaves the right wing spot up for grabs and despite a recent upturn in form from Dan James, Mason Greenwood could get the nod on this occasion. Milan are not likely to leave much space behind their back line for James’ pace to exploit and so Greenwood’s clinical finishing should be the more useful weapon to have in United’s armoury for the match.

Elsewhere, Shaw and Lindelof may be put in cotton wool on this occasion, with Alex Telles and Eric Bailly coming in for another cup adventure. Both have played well when called upon this season.

Dean Henderson will continue in goal as David de Gea has not yet returned from paternity leave.

There will be an injury update from Ole Gunnar Solskjaer at around 1.30pm this afternoon, which will be covered here as it happens, but based on what we know so far, this is our predicted line-up for the game: 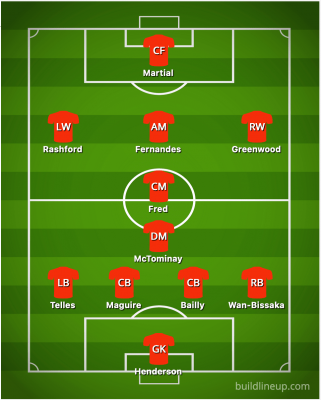