Donny van de Beek, Juan Mata, Phil Jones and Paul Pogba are all definitely ruled out of the game, leaving the midfield almost as threadbare as the forward line.

Solskjaer was also vague about David de Gea’s availablility, confirming that he was back in Manchester self-isolating after his paternity leave in Spain, but saying he was unsure as to whether he would be out of quarantine in time for tomorrow’s game.

Given that he hasn’t trained all week, it seems logical that Dean Henderson will retain his place in goal even if De Gea is available.

Despite Eric Bailly’s excellent recent form, Solskjaer’s pattern is normally to restore the dreaded Victor Lindelof – Harry Maguire centre-back partnership in Premier League games, with Luke Shaw also coming back in at left-back after being rested in midweek.

The midfield almost picks itself, with Scott McTominay and Fred almost certain to start and Nemanja Matic and his aging legs returning to the bench.

Assuming none of the three injured forwards recover in time, Solskjaer has two options; sticking to his preferred 4-2-3-1 formation with an inexperienced forward line, or changing to a different one. The former scenario would mean a Dan James – Mason Greenwood – Amad attacking trio.

If the boss feels it’s too soon for Amad to start, a 3-5-2 with the addition of either Eric Bailly or Alex Telles, or something like a 4-3-3 with Matic included and Bruno Fernandes playing as a false nine could be contemplated.

With all things considered and after his goal on Thursday, we think Amad will get his start, so with that in mind, here is our predicted line-up: 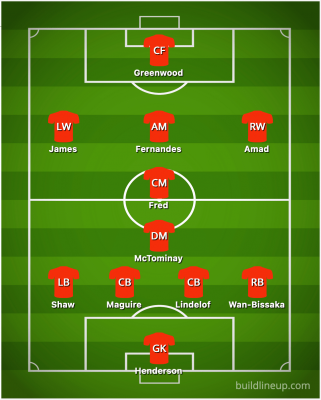