Predicted XI vs AC Milan: the big guns are back for crucial second leg

Ole Gunnar Solskjaer has an embarrassment of riches to choose from tomorrow as he welcomes five players back to his squad for the trip to face AC Milan in Italy.

Paul Pogba, Edinson Cavani, Donny van de Beek and David de Gea are all back in training and Solskjaer has also indicated that Anthony Martial should also be available.

Marcus Rashford and Bruno Fernandes looked exhausted against West Ham on Sunday and could be rested, although a must-win away leg at the San Siro could be the toughest Europa League tie United have to face this season. So the manager will probably try to squeeze one last drop of energy out of his star men rather than save them for Sunday’s FA Cup tie with Leicester.

De Gea may be restored in goal having missed four games. Dean Henderson has done well in his absence, keeping three clean sheets, but Solskjaer may want his first choice number one back and firing as we move into the business end of the season.

Eric Bailly usually gets the nod over Victor Lindelof in cup games – the Swede has an ongoing back condition that is being carefully monitored – and we expect this to be the case again tomorrow. Alex Telles is also usually rotated with Luke Shaw for Europa League clashes but due to the difficulty of this task, the boss will probably stick with Shaw and bring Telles in on Sunday.

In midfield, it will be tempting to throw Pogba straight back in as his creativity has been sorely missed. However, after a long lay-off he is not going to be match fit so it is more likely he’ll come off the bench for some minutes in the second half. Fred and Scott McTominay are therefore the likelier starters.

With everyone available, the big question is who will be the front three. Mason Greenwood could keep his place after impressing lately, so unless Rashford is rested it will be a choice of Martial or Cavani up top. We expect Cavani to get the nod due to Martial’s inconsistency in front of goal this season.

With all that in mind, then, here is our predicted XI to face Milan: 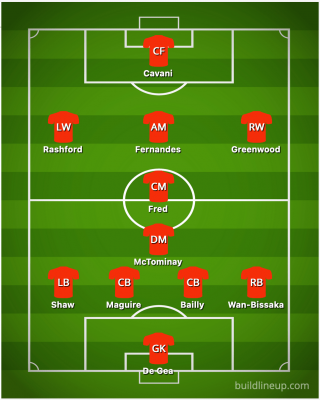