Marcus Rashford, Anthony Martial and Edinson Cavani are all doubts for the game and the boss has said he is unsure as to whether Paul Pogba is fit enough to start.

Normally, if the game was to be followed by a Premier League game, Solskjaer would likely rest a few players but what follows is an international break. So, what do you do? Play your strongest team and hope they don’t get to play too much on international duty? Or rest them, knowing that they will not be offered a break by their national team managers?

Even if Rashford pulls through in time, the manager surely has to rest him whether or not he expects him to play for England in the coming days. He is the walking wounded personified.

The manager will also probably want to bench Dan James, who despite an improvement is clearly not good enough as a provider to warrant a place on the flanks at United.

If Cavani and Martial are both fit, both might be thrown back into the fray. But if Pogba is also selected there would then be three players who are unlikely to complete 90 minutes in the starting line-up. Bearing in mind that the match could go to extra time and penalties, that would not be a good move.

It’s likely, then, that two of those four (Rashford, Cavani, Pogba and Martial) will start and two will be on the bench. We’ve plumped for Pogba and Martial to start with Rashford and Cavani on the bench. Pogba did well from the left on Thursday so could start there, with Martial up front, Mason Greenwood reverting to the right wing and one last drop being squeezed out of Bruno Fernandes in the number 10 position before he goes on his own international break.

Elsewhere, the goalkeeping situation has reached an interesting point. Dean Henderson has kept clean sheet after clean sheet and is usually picked for cup games. However, David de Gea is back and has already sat a game out on the bench on Thursday. The longer Henderson is in the box seat, the harder it will be for De Gea to get back in.

Luke Shaw has probably been United’s best player in recent weeks but he also has been called up for international duty so could be rested, with the more than capable Alex Telles coming into the side. Solskjaer has not mentioned whether Eric Bailly is fit again so we have assumed Victor Lindelof and Harry Maguire will continue at the back.

Scott McTominay and Fred will probably continue in midfield and Aaron Wan-Bissaka at right back. 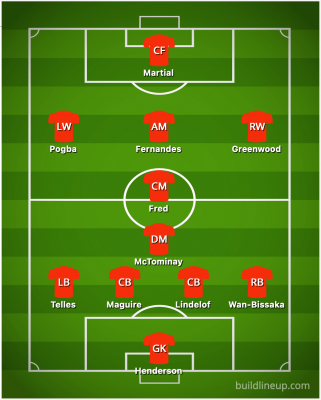