Home » Predicted XI vs Brighton: Martial out, and who will start in goal?

Predicted XI vs Brighton: Martial out, and who will start in goal?

Ole Gunnar Solskjaer is hoping that Marcus Rashford and Mason Greenwood will be available for selection against Brighton and Hove Albion tomorrow, but Anthony Martial looks almost certain to miss out.

Martial picked up an upper leg injury playing for France against Kazakhstan and hasn’t trained since.

If Rashford and Greenwood have no reactions to training, the forward line should pick itself, with Edinson Cavani playing in the centre forward role. The manager does like to throw in Dan James now and again, however, in which case Greenwood would probably drop to the bench.

Solskjaer now has to decide how his midfield will look with everyone fit. ‘McFred’ – Scott McTominay and Fred – are his usual ‘go-to’ defensive midfield duo but Paul Pogba’s creativity has been sorely missed in the side and he will surely be recalled.

In the past Pogba has been played alongside the specialist holding midfielder of Nemanja Matic, but the Serbian has been in horrible form lately. So the manager can either (a) pick either Scott or Fred alongside Pogba and sacrifice some protection for the defence, (b) pick Matic alongside Pogba and hope his form improves, (c) play Pogba higher up the pitch and drop one of the forward players to the bench or (d) use Pogba as an impact substitute. We have gone for (a) but there is an argument for every choice.

Assuming Victor Lindelof has recovered from his latest back flare-up which saw him rested for the last of Sweden’s recent games, normal service will be maintained in defence, with Wan-Bissaka, Maguire and Shaw taking up the other berths. Eric Bailly will be on stand-by if Lindelof doesn’t make it.

Solskjaer had to field three separate questions at yesterday’s presser about whether he saw Dean Henderson or David de Gea as his number one. While he remained tight-lipped, there was a shift in his narrative, speaking for the first time of the two keepers as equals. Previously he has always spoken of De Gea as being the best keeper in the world and of Henderson as ‘maturing all the time’. So it’s another hard one to call, but it looks as if the England man could get the nod on this occasion.

With all that in mind, this is our predicted XI for tomorrow’s game, which kicks off at Old Trafford at 7.30pm: 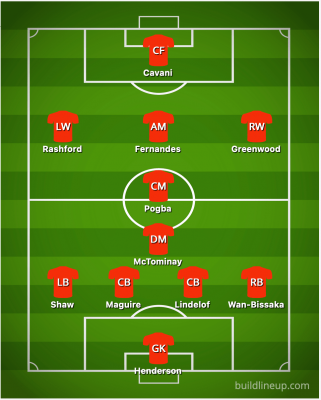