Marcus Rashford remains a major injury doubt for Manchester United as they prepare to travel to Spain for their Europa League quarter final first leg tie against Granada tomorrow.

Rashford did not train with the squad yesterday and could join Anthony Martial on the sidelines for the match.

Anthony Elanga has been added to the ‘B’ list for the match, which is another sign that the Reds might be short of strikers. With five substitutions allowed, it is possible we could see a debut.

Juan Mata is also back in training and could play some part in his first game since the FA Cup third round clash with Watford on January 9th.

Assuming Rashford doesn’t recover in time, Ole Gunnar Solskjaer could revert to a diamond midfield, or something alternating between a diamond and a 4-2-3-1, with Paul Pogba operating on the left, Fred on the right, Scott McTominay holding and Bruno Fernandes at the tip. Edinson Cavani and Mason Greenwood would then operate as twin strikers, with Greenwood drifting back wide right when Fred drops back into a defensive midfield role out of possession.

Another option, if Solskjaer doesn’t fancy the left-footed Fred on the right of midfield, would be to switch him with McTominay in the same formation.

Elsewhere, Dean Henderson should keep his place in goal although David de Gea will be keen to get back in the action. Alex Telles is back in training and could have a run out at left back to give Luke Shaw a rest, otherwise the defence is likely to be unchanged, especially as Eric Bailly is ruled out with Covid-19.

Solskjaer has made a lot of changes in previous Europa League rounds, resting key players in preparation for the Premier League. With a tough away tie at Spurs on Sunday, Solskjaer may do so again, but we think that the 11 point cushion between United and fifth place in the League will encourage him to pick something close to his strongest XI in this tournament, United’s last chance of silverware this season.

With all that said, here is our predicted XI for tomorrow’s game: 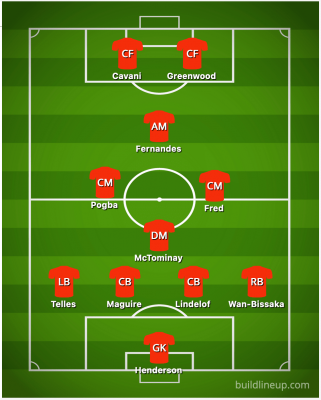