Marcus Rashford and Luke Shaw are expected to be fit for Manchester United’s trip to White Hart Lane to face Tottenham Hotspur tomorrow and manager Ole Gunnar Solskjaer has some big decisions to make regarding his team selection.

The first issue is who will play in goal. Dean Henderson enjoyed a long run that extended beyond David de Gea’s paternity leave, but the Spaniard was recalled for the Europa League quarter final against Granada on Thursday and kept a clean sheet. Was that a sign that he has been reinstalled as the first choice, or is he now the ‘cup keeper’ and Henderson the Premier League option?

We have gone for Henderson tomorrow, but it’s hard to know what’s in the manager’s mind where the keepers are concerned.

Paul Pogba has played alongside Fred and Scott McTominay in defensive midfield in the last two games but for this tough away fixture Solskjaer will probably want to provide more cover for his defence. That would mean both McTominay and Fred playing and Pogba pushing higher up the pitch at the expense of one of the forward players.

Marcus Rashford and Bruno Fernandes are almost certain to start, if fit, so that leaves the questions of whether Cavani or Greenwood takes the final starting berth and what formation will be played.

Again, this is a hard one to call but we have gone for Cavani and Rashford as a front two, with Bruno in the hole and Pogba drifting from central to left midfield. It’s not a particularly balanced formation and leaves the right side as an obvious weakness. McTominay would need to help Wan-Bissaka down the right flank when in possession. Alternatively, Pogba could perform the same role on the right, with Luke Shaw providing the width on the left and Rashford drifting wide to support him – but that would not be a familiar role for the Frenchman. 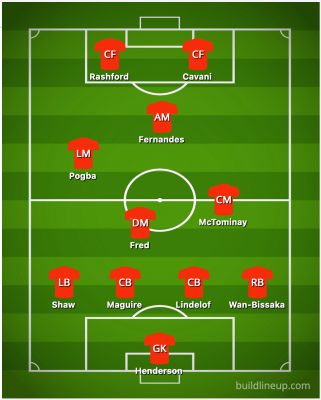