Eric Bailly is available again, having quarantined after contracting Covid-19 while on duty for the Ivory Coast, so he is likely to come in for the captain, with Victor Lindelof probably switching to the left centre-back role and Bailly playing on the right.

David de Gea was chosen in goal for the first leg so could start again as he reprises his new role as ‘cup keeper’. Dean Henderson now appears to be Ole Gunnar Solskjaer’s preferred starter in the league.

Elsewhere in defence, Alex Telles is usually brought in for Luke Shaw in cup games anyway, while Aaron Wan-Bissaka tends to keep his place at right back.

With an unfamiliar centre-back pairing, Solskjaer will probably take no chances in midfield and so we expect Nemanja Matic and Fred to play in their familiar DM roles to protect the defence.

With a 2-0 lead from the first leg, Marcus Rashford will surely be given a chance to heal some of his numerous wounds and Edinson Cavani is also not accustomed to playing three games in eight days. This could mean that Paul Pogba plays on the left wing again, although he is one yellow card away from suspension. Dan James comes in on the right and Mason Greenwood leads the line with Bruno Fernandes behind.

If Solskjaer is feeling more adventurous, Donny van de Beek could be given a rare start in Bruno’s place but it is more likely that the manager will take a cautious approach for the first hour or so. 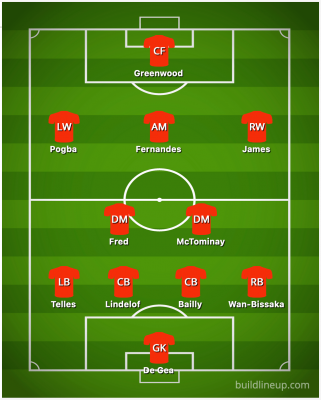