The England man has been struggling with both ankle and shoulder injuries this season and was unable to take part in Thursday’s win against Granada. Ole Gunnar Solskjaer told Manutd.com on Friday ‘hopefully he can play. We’ll do a test with him the day before the game,’ but with a number of tougher games coming up, it would probably be wise to leave him on the bench and only bring him on if needed.

That, of course could be partly determined by whether 34-year-old Edinson Cavani is able to play a third game in eight days. The striker has been on fire this week and will surely lead the line if fit.

With Anthony Martial still out and Eric Bailly available but still recovering from Covid-19, the question mark over Rashford is probably the only one that will be concerning Solskjaer. Paul Pogba has done a good job there of late, so that is very likely to be the solution again this time, with ‘McFred‘ occupying the two defensive midfield positions.

With the luxury of having no midweek game this week, there is no reason why the manager shouldn’t pick his strongest XI, apart from Rashford.

Who will play in goal continues to be an issue that is hard to predict. The pattern of late seems to be that Dean Henderson has become Solskjaer’s Premier League keeper and David de Gea has been selected in the Europa League.

If this continues, and we think it will, it will be further indication that the boss is giving the 23-year-old the rest of this season to prove that he can cut the mustard week-in, week-out in the Premier League.

If Henderson passes the test, then he will surely be United’s number one next season, with De Gea potentially moving on. 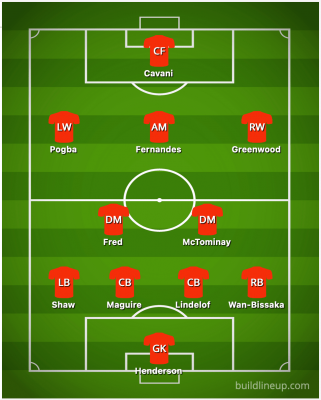