Two of the so-called ‘Red Knights’ have sent a letter to one of Manchester United’s controlling shareholders, Joel Glazer, demanding that his family reduce their stake in the club to below 50%.

The Red Knights were a group of bankers and financiers who were also lifelong United fans and who tried to wrest control of the club from the Glazers in an unsuccessful take-over bid in 2010. The bid failed when the Glazers set an asking price for the club massively in excess of the true market value.

Lord O’Neill, Goldman Sachs’ chief economist and Sir Paul Marshall, co-founder of one of Europe’s largest hedge funds, are the two former members who have sent the letter, leaked by Sky News this morning.

The letter demands that:

* The club’s dual-class share structure should be scrapped and replaced with a single class of voting stock.
* The Glazers commit to reducing their combined stake from the current level, around 75%, to a maximum of 49.9%.
* That the shares they sell to reduce their stake should be sold at the original $14 IPO price ‘as a gesture of your desire to do things right’. 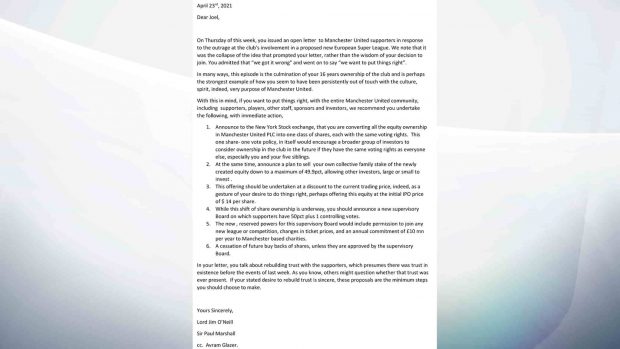 The dual-class share structure allows for people with the unlisted ‘B’ class shares – the Glazer family – to have 10 votes per share. The NYSE-listed class ‘A’ shares – the only ones available on the open market, entitle their holders to just one vote per share.

The letter states that these concessions would ‘encourage a broader group of investors to consider ownership in the club in the future if they have the same voting rights as everyone else, especially you and your five siblings’.

Sky News notes that ‘The duo’s intervention is significant, because it hints at the most concerted move in a decade by those involved in the original Red Knights agenda to revive their efforts to oust the Glazers.’