Marcus Rashford is once again the only unknown factor for Manchester United as they head across the Pennines for tomorrow’s Premier League clash with Leeds United.

A win at Elland Road would leave United knowing that three more points against Liverpool next weekend would assure them of Champions League football next season with four games to spare.

And speaking to the club’s official website, manager Ole Gunnar Solskjaer revealed that whilst long-term absentees Anthony Martial and Phil Jones are still ruled out, there are no fresh injury concerns other than the ongoing issue of Rashford’s fitness.

‘Marcus hasn’t trained but I hope that he will join us tomorrow,’ the boss said.

‘Apart from that everyone – of course Anthony is injured still – has had a couple of days of recovery and a week of preparation and training.

‘You need that against these. They make you go to the edge physically and mentally.

‘They have a unique style of play and it’s a game we’re looking forward to.’

Solskjaer is not one to rotate and although there is a crucial Europa League semi-final against Granada coming up on Thursday, he is expected to field his strongest side for tomorrow’s game.

The only question mark is therefore whether Rashford will start or not. If he does not, Paul Pogba will probably take up the left midfield position, with Scott McTominay and Fred holding.

If Rashford does start, then either Edinson Cavani or Mason Greenwood could make way.

Given United’s strong position in the league, it seems more likely that the England man is kept in cotton wool for Thursday and on that basis, this is our predicted XI for tomorrow’s match: 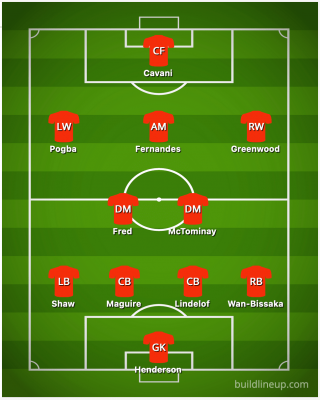