Eric Bailly is close to agreeing a four-year extension to his Manchester United contract, according to ESPN.

Rumours of the 27-year-old leaving the club had been mounting after a deal had not been agreed with just one year remaining on his current contract.

It was reported that Bailly wanted assurances over his playing time, with Harry Maguire and Victor Lindelof seemingly the preferred starting partnership of manager Ole Gunnar Solskjaer.

However, ESPN’s sources claim that there has been a breakthrough in negotiations and that the Ivorian is set to sign a four-year extension to his current deal.

‘Sources have told ESPN Bailly is satisfied he will get opportunities if he stays fit,’ ESPN reports.

‘The club have had concerns about his injury record after making just 37 Premier League appearances since the start of the 2017-18 season.’

The report follows another breaking over the weekend which claimed that Luke Shaw is about to be handed a five-year extension with a hefty £40,000 per week pay increase.

But as reported here in regard to Shaw’s extension, the length of contract reported for Bailly makes little sense from United’s perspective.

Bailly has had a horrific injury record and it is surely wreckless of United to give him such a lengthy deal without him first proving his fitness.

This season alone has seen the defender absent with six different injuries or illnesses, including Covid-19. 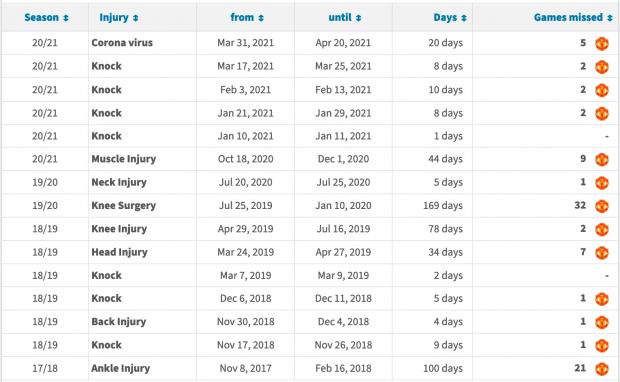 Many United fans would argue that Bailly is the club’s best centre back, but his constant bad luck injury-wise makes any contract of longer than one or two years a huge gamble for the club.