Apart from long-term absentees Anthony Martial and Phil Jones, Ole Gunnar Solskjaer is believed to have few other concerns, with Marcus Rashford’s ongoing ankle problem the only known issue.

The manager will provide a news update at his press conference this lunchtime but given all is well, he is likely to field what he believes is his strongest side for this game despite the small matter of a Premier League tie with Liverpool awaiting the Red Devils on Sunday.

David de Gea would seem to now be the Europa League keeper and should keep his place in goal, which means Dean Henderson will drop to the bench.

One possible question mark is the left back position. Alex Telles is usually given the nod in Europa games while in-form Luke Shaw is rested, but as it’s crunch time now it is more likely that the boss will stick with the England man.

Despite an underwhelming performance at Leeds, Scott McTominay and Fred will probably occupy the twin holding midfield positions as usual. With Bruno Fernandes in the hole and Edinson Cavani up front, this leaves the two wings up for grabs, with Rashford, Paul Pogba and Mason Greenwood all in contention.

If Rashford is fully fit, the manager will no doubt pick him and Pogba, with the unfortunate Greenwood dropping to the bench. This would see Rashford playing on the right and the Frenchman on the left.

A youthful bench will also include Amad, Shola Shoretire and Anthony Elanga. Hannibal has also been training with the first team but is ineligible for the ‘B’ list for Europa League games. 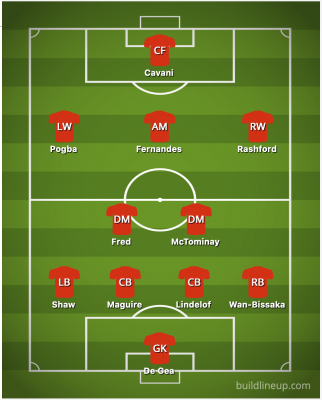