Predicted XI vs Liverpool: Greenwood set to miss out again

There could be some tired legs among the Manchester United team after their Europa League exploits on Thursday, but Sunday’s match against Liverpool is not a time to rest players.

Regardless of the points cushion the Red Devils have built up in the hunt for Champions League places, Liverpool is Liverpool and for many it is the most important match of the season, regardless of league positions.

Manager Ole Gunnar Solskjaer is well aware of that fact so we fully expect him to pick his strongest XI for tomorrow’s tie.

With Dean Henderson likely to return in goal, the question is whether any outfield players will be changed from the starting XI against Roma.

Edinson Cavani, Bruno Fernandes and Paul Pogba were all in such exceptional form on Thursday that Solskjaer will surely keep them together if he can. With the back four also unlikely to change, the only questions remaining will be whether Mason Greenwood is given a start ahead of Marcus Rashford and whether the boss will keep plugging away with his preferred Scott McTominay – Fred double pivot.

Pulling Pogba further back to replace one of those two would upset the balance. It seems unlikely that the boss will suddenly throw Donny van de Beek into the mix, so unless Nemanja Matic is given a run out, McFred is likely to remain intact.

Greenwood is on fire and certainly deserves a start but the boss has, to date, always selected Rashford no matter what, if fit. So we expect he’ll do so again and the unfortunate 19-year-old will have to settle for a place on the bench again.

With all that in mind, this is our predicted XI for tomorrow’s game: 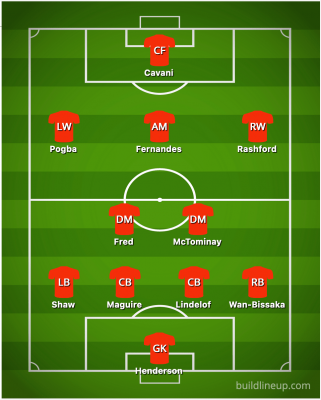 Manchester United fans will be allowed to attend...

All change for Manchester United vs Leicester City...