Manchester United fans have found a way to hit controlling shareholders the Glazer family where it hurts – in their pockets – as a new campaign to boycott the club’s sponsors and commercial partners has gone viral on social media.

The campaign, with the hashtag #NotAPennyMore, has seen fans using the likes of Trustpilot.com to post negative reviews about brands such as TeamViewer, the Red Devils’ new shirt sponsors.

I see @TeamViewer have had a terrific day over on @Trustpilot ???????? pic.twitter.com/7eqPcdxWQq

By boycotting brands associated with United, it is hoped that those sponsors will pull out from their partnerships with the club due to the bad publicity and discourage other sponsors from taking their place.

A letter signed ‘Manchester United fans’ has also been sent to the sponsor companies, explaining the reason for the campaign and saying ‘Manchester United fans will boycott your products, seek to tarnish your brands and support your competitors until you terminate your commercial partnership with the Glazer family.’ 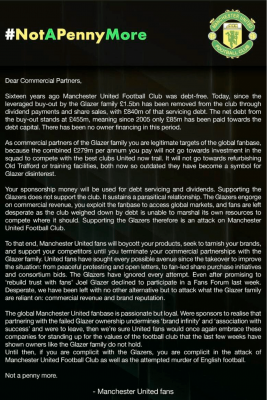 ‘Many of the sponsors have already been targeted,’ The Times reports. ‘TeamViewer, the IT company that recently signed a £235 million shirt sponsorship deal, has been bombarded with negative reviews online, meaning their score on Trustpilot, the consumer website, has plummeted from four stars out of five to one.

‘The same has happened to AON, the insurance giant, which sponsors the club’s training ground.’

It is a novel and potentially extremely effective way for fans to get their message across and if maintained could make a significant difference to the #GlazersOut campaign.