Manchester United manager Ole Gunnar Solskjaer has an interesting choice to make when selecting his starting XI against Roma in the second leg of the Europa League semi-final tomorrow.

The Reds have a four-goal lead coming into the match and with a difficult Premier League away tie against Aston Villa looming on Sunday, it would make sense to rest some key players.

On the other hand, with a top four finish seemingly close to being clinched, the boss may want to pick a strong side to avoid any slip-ups.

There is also a slim possibility that the points for United’s postponed Premier League match on Sunday could be awarded to Liverpool if the Premier League believe United could be held responsible for the events that unfolded. Those three lost points plus a defeat against Villa might start drawing a little bit of pressure with just three games left and points still needed.

However, the ability to use five subs should give the manager the confidence he needs to rest the likes of Bruno Fernandes, Edinson Cavani, Paul Pogba and Marcus Rashford and give some much needed game time to others, such as Donny van de Beek, Eric Bailly and Juan Mata.

David de Gea is likely to return in goal – he seems to be the Europa choice – but we think Solskjaer will consider wholesale changes to be too much of a risk. So we expect the likes of Harry Maguire, Aaron Wan-Bissaka and Fred to retain their places.

Roma will need goals, so counter-attacking will probably be the order of the day and so whippet-like Dan James is likely to start. If all goes well, we may also get another chance to see a second flying winger, Amad, for 20-30 minutes in the second half. 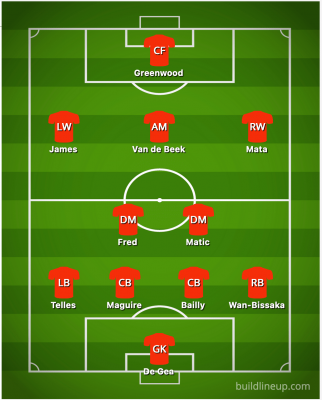 Ralf Rangnick admits there is a ‘profile missing’...