Home » David de Gea vs AS Roma: Brilliant, but why did he need to be?

David de Gea vs AS Roma: Brilliant, but why did he need to be?

David de Gea rightly received praise for an outstanding goal-line performance for Manchester United against AS Roma yesterday in the second leg of the Europa League semi-final, despite conceding three goals.

The scoreline could have been a lot worse and there could have been real danger of Roma overcoming their four-goal first-leg deficit had the Spaniard not pulled off a number of excellent reflex saves, particularly in the second half.

The 30-year-old is undoubtedly still one of the best, if not the best, shot-stoppers in the world but has lost his place in Manchester United’s starting XI to Dean Henderson after some impressive performances by the understudy and some high-profile errors from the senior man.

But brilliant as the display yesterday was and as unpopular and negative as this may sound, it is important to ask the question as to why there were so many saves to be made against a Roma side who were 7-2 down on aggregate at half time and who were down and out. Was it lapsed concentration from a defence with one foot in the final? Poor management in terms of tactics and team selection? Or is there a flaw in De Gea’s game – and strength in Henderson’s – that goes largely unnoticed to the casual viewer?

Luke Shaw’s uncharacteristic dithering that put United under pressure in the first half is an example. Could it have been avoided by a clearer shout of ‘man on’ from the keeper? Or any other defender for that matter? 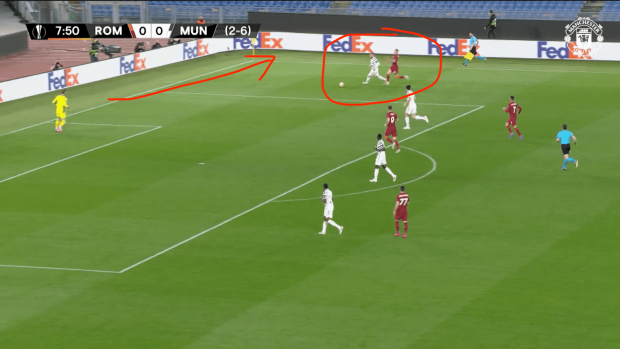 The gaps that appeared between Eric Bailly and Harry Maguire could have been narrowed by instructions from the keeper. Edin Dzeko’s unmarked presence in the box, Henrikh Mkhitaryan’s well-timed runs, a lot of these dangers could potentially have been avoided by a more vocal conductor’s performance from the man between the sticks.

Last night’s game also saw a lot of promising United through balls being thwarted by Roma keeper Mirante coming off his line and operating as a sweeper keeper. De Gea is rarely off his line. This forces the defence to play deeper, which draws pressure onto the side.

Statistics should not be taken out of context but the difference between the two keepers this season makes for stark reading: while Henderson has conceded just 16 goals in 23 appearances, De Gea has conceded 42 in 33. There are, to quote a legal expression, some ‘extenuating circumstances’ behind these figures but the contrast is just so extreme that it is hard to put it down simply to the fact that De Gea may have been picked for harder games in the earlier part of the season.

This author is as grateful as any other United fan for the fantastic years of service that De Gea has brought to the club. There is an immense amount to be grateful to him for. But you do have to ask, at some point, why the defence never seems to perform as well when he is behind them.

Ousmane Dembele confirmed to be unavailable to face...