Manchester United manager Ole Gunnar Solskjaer has the almost impossible task of fielding a competitive side for three games in five days this week, and five games in eight.

Champions League qualification could, however, be clinched this weekend in the first of those three games, as United head to the Midlands to face Aston Villa.

If Spurs, Liverpool and West Ham all drop points against Leeds, Southampton and Everton, respectively, then a win for Solskjaer’s men tomorrow will be enough to secure that top four spot.

A win, regardless of other results, would all but mathematically secure the same, as only West Ham would be capable of catching United on points, but they have an 11 point inferior goal difference.

For these reasons, and with the Europa League final in the bag, it would make sense for Solskjaer to play his strongest side tomorrow and get the job done.

Another game so soon may be too much for Edinson Cavani, who could drop to the bench, to be called upon only if needed in the second half. Mason Greenwood would then lead the line, with Rashford wide right and Paul Pogba taking up the left midfield mantle again.

Anthony Martial is back training on grass but not close to making the squad and Dan James is also unlikely to recover in time from his own injury.

If the job can be done at Villa Park, it is likely to be a very different side that takes the field against Leicester at Old Trafford on Tuesday, especially with Liverpool visiting just two days later.

Here then, is our predicted starting XI for tomorrow’s game: 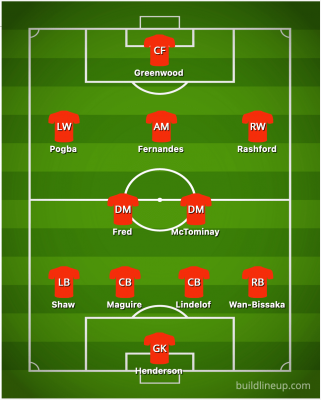