With this evening’s match against Leicester City coming just over 48 hours after Sunday’s match at Villa Park, and with Champions League football now guaranteed for next season, Ole Gunnar Solskjaer will almost certainly field a much-changed side.

Harry Maguire, Daniel James and Anthony Martial are all likely to be ruled out anyway, and Victor Lindelof’s back and Marcus Rashford’s foot are both being carefully monitored through the season, so it is likely they will be rested too.

Edinson Cavani only played 25 minutes on Sunday so could lead the line, and while Mason Greenwood was rested for those same 25, we think it’s more likely he will start on the bench.

Elsewhere Bruno Fernandes will be demanding to play as he is chasing 30 goals for the season (he is on 27 in all competitions) but the manager will surely have to be sensible and order the Portuguese playmaker to sit this one out. Fred, Luke Shaw and Aaron Wan-Bissaka, too, have played a huge amount of football of late, so we expect them all to be rested as well.

Paul Pogba also played 90 minutes against Villa so could also be given the evening off.

Even Dean Henderson could be rotated just to keep David de Gea’s eye in, should Solskjaer be planning to play him in the Europa League final.

This all could lead to starts for Brandon Williams, Eric Bailly, Axel Tuanzebe, Alex Telles, Nemanja Matic, Donny van de Beek and Juan Mata. Amad could also get his first start on the right wing, with Mata likely to take up the number 10 spot and Van de Beek on the left, although the Dutchman might be given the number 10, with Mata wide right and Amad on the left.

Scott McTominay has been rotated reasonably well recently so could join Matic in the double pivot.

With all that in mind, here is our predicted XI for this evening’s early kick-off: 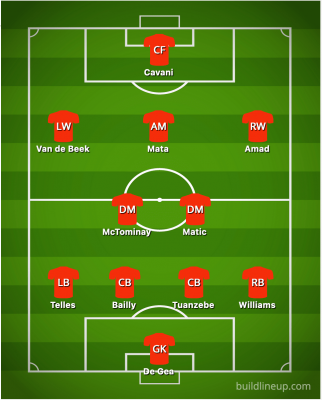 Antony at Ajax but missing from training amid...