Manchester United are reportedly upping security around Old Trafford for this evening’s Premier League tie against Leicester City amid rumours of further protests from the fans.

Last Sunday’s tie with Liverpool had to be postponed after fans, demonstrating against the club’s controlling shareholders the Glazer family, broke into the ground and surrounded the team’s bus at the Lowry Hotel in Salford.

The Mail reports that ‘A 10ft high red wall has been erected at the south-east corner of the stadium – where protesters twice broke in and got onto the pitch – as well the north forecourt in front of the Sir Alex Ferguson Stand.

‘Additional steel barriers have also been put in place as part of the heightened security operation.’ 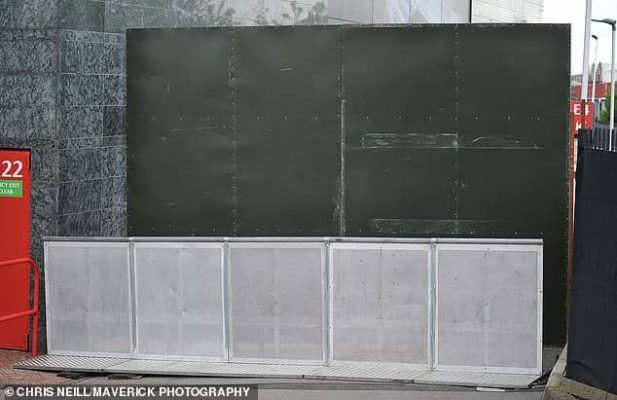 One of the steel barriers. Source: The Mail

The Times adds that ‘During the previous protest supporters entered the stadium via a door near an entrance to the Munich Tunnel. A board has since been erected at the end of the tunnel.

‘The area in front of it, between the Sir Bobby Charlton Stand and the East Stand, is now protected by three rows of barriers.

‘A security fence has been erected in front of the other side of the East Stand to prevent fans from gaining access to the walkway underneath the Sir Alex Ferguson Stand.

‘Another barrier has been put up in front of the United Trinity statue of George Best, Sir Bobby Charlton and Denis Law.

‘United’s players have had to change their pre-match routine, spending the night at home rather than in the Lowry Hotel.

And The Telegraph explains that ‘it is believed that protests are planned for Thursday’s match, rather than tonight’s,’ but it seems that the club is taking no chances and has prepared the barricades in time for this evening’s fixture.

It is still a little baffling as to why such measures weren’t taken last Sunday as the protests were very widely publicised in advance. But the fans will not be underestimated so easily again by the police and by the club.

Casemiro heading for Old Trafford to have medical...