Man United predicted XI vs Liverpool: powerhouse line-up for a matter of pride

After making ten changes for last night’s Premier League match against Leicester City, Ole Gunnar Solskjaer is expected to bring the big guns back for the battle of honour with Liverpool at Old Trafford tomorrow.

Whilst Champions League football is now guaranteed for the Red Devils, local pride is always at stake when the two giants meet and fans will also be urging United to do everything they can to take three points that the Merseysiders desperately need in their own quest for a top four finish.

A United win would leave Liverpool seven points behind Chelsea and nine points behind Leicester with just three games to play, with West Ham also in the mix as well.

Harry Maguire will join Anthony Martial and Dan James on the sidelines but otherwise United are expected to return to the side that has served Solskjaer so well this season.

Dean Henderson will return in goal, Aaron Wan-Bissaka and Luke Shaw at full-back and Victor Lindelof will probably partner Eric Bailly at centre half.

Despite an excellent performance from Nemanja Matic yesterday, Scott McTominay and Fred are almost certain to reprise their roles as the dual midfield pivot. With Paul Pogba, Bruno Fernandes, Marcus Rashford and Edinson Cavani all now fresh and raring to go, it could be Mason Greenwood that now gets a chance to put his feet up after his excellent performance up front yesterday.

With all that in mind, here is our predicted starting line-up for tomorrow’s game: 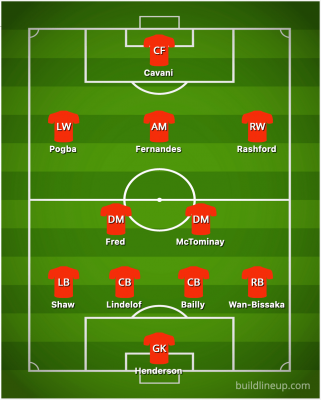