Some Manchester United fans may have mixed feelings on Ole Gunnar Solskjaer and it’s safe to say the verdict is still out on him a little.

However, one thing no one can truly complain about is his handling of the club’s most crucial tradition which is to give homegrown players a chance.

Solskjaer has never been afraid to turn to youth during his reign so far and that is something United fans appreciate greatly.

It was often a criticism of Jose Mourinho‘s that he didn’t like to give enough youngsters a chance and only did so when forced.

Many prospects of the Red Devils have made their debut under Solskjaer and if there’s one thing he can look back on proudly, it will be this. 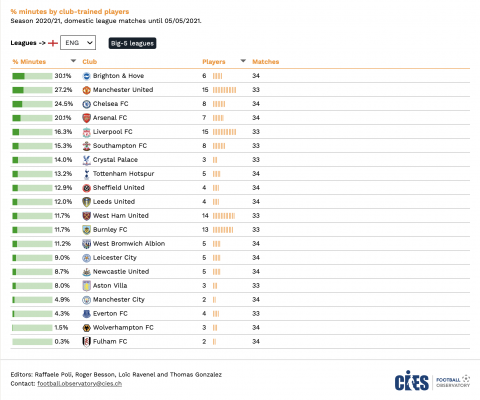 Brighton and Hove Albion may have given more percentage of minutes to their youngsters than Manchester United this season but the latter does have the advantage in terms of the number of players they’ve used.

This means Solskjaer has perhaps spread the minutes amongst more homegrown players with no club on the list using a greater number.

It may be a minor fact but it is important to point out United have played one less game than Brighton in that statistic’s table so perhaps the ratio is greater than being shown.

Fans are excited of late with their club’s youngsters and are looking forward to reaping the benefits of an academy that has been invigorated recently.