Ole Gunnar Solskjaer has some interesting choices to make in terms of team selection for tomorrow’s final home game of the season against Fulham.

On the one hand, it is a much easier game on paper than Sunday’s final Premier League game at Wolves, which would suggest resting a few players. On the other hand, that Wolves game is only three days before United’s Europa League final against Villareal in Gdansk, which is clearly Solskjaer’s top priority. So the manager may decide to pick a relatively strong side for tomorrow’s game and then rest key players against Wolves.

There are other factors at play as well. 10,000 supporters to entertain inside Old Trafford for the first time this season. And after the defensive shambles against Liverpool last time out, should the boss try to reshuffle his rearguard or give the same five the chance to put things right? And who should play in goal, given that the jury still appears to be out in terms of who makes it for that Euro final?

It is therefore very hard to predict what will be in Solskjaer’s mind for tomorrow.

It would probably make more sense to keep the same back five and hope that they can regain their confidence after Thursday’s debacle.

Scott McTominay and Fred were very poor against Liverpool and so given that this is a home game against an already-relegated side, the manager could opt for the slightly more adventurous pairing of Nemanja Matic and Donny van de Beek. A really good performance from either or both of these players could even force them into Solskjaer’s thinking for the final.

Further up the field, Bruno Fernandes is chasing 30 goals for the season so he will be banging on the boss’s door demanding to play. On the other hand, Edinson Cavani has become so important that he could be kept in cotton wool, with Mason Greenwood leading the line again. That leaves Marcus Rashford potentially playing on the right and Paul Pogba on the left, although one or both could be rested for either Juan Mata or Amad, for example.

If Pogba and Rashford both start, they will then probably be just given 30 minutes off the bench against Wolves. 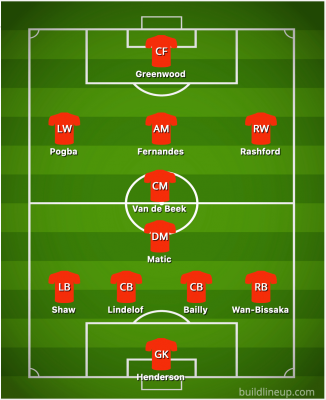