With the Europa League final following just three days later, Manchester United manager Ole Gunnar Solskjaer is expected to field a much changed side for the Red Devils’ trip to Molyneux to face Wolves tomorrow.

United are guaranteed to finish the Premier League in second place regardless of the result and Wolves have nothing at stake either.

It will be the last match for their manager Nuno Espirito Santo, who is set to leave at the end of the season, so it could be an emotional time for the Midlands club.

There could be another farewell on United’s side, with Juan Mata’s future at the club uncertain.

Solskjaer admitted that a decision would be made about the little Spaniard at the end of the season and so tomorrow’s game could be his last in a red shirt. We therefore expect him to start the game, especially as he needs match fitness in case needed in the Europa final.

All eyes will be on the goalkeeping position in the manager’s selection. Rumours are abounding that David de Gea will get the gloves on Wednesday so that would make it more likely that Dean Henderson will start this one. If De Gea starts, it could mean the opposite.

Full-backs Aaron Wan-Bissaka and Luke Shaw are likely to be rested, with Brandon Williams and Alex Telles the obvious replacements.

Solskjaer said at yesterday’s press conference that he does not think Harry Maguire will make Wednesday’s final. So whichever centre-back pairing he intends to play against Villareal could be given a run-out tomorrow to give them more experience of playing together.

The manager has faith in victor Lindelof so it is likely to be a case of who partners him – Axel Tuanzebe had a good game against Fulham whilst Eric Bailly struggled against Liverpool. This could put him ahead in the race and selection again tomorrow would be strong evidence of the manager’s intentions.

In midfield, both Scott McTominay and Fred picked up knocks recently so are likely to be rested. Nemanja Matic and Donny van de Beek are the obvious replacements.

The manager also said at the presser that Dan James has recovered from injury so he could start the game on the left wing, with the exciting Amad given another opportunity on the right.

Mason Greenwood will probably lead the line for 55 minutes or an hour before being returned to cotton wool for Wednesday. 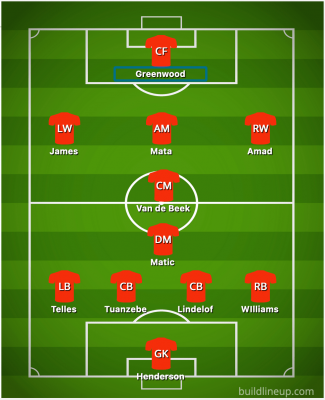