Ole Gunnar Solskjaer could be set to surprise everybody by selecting a bold, attacking line-up for Manchester United’s Europa League final against Villareal tomorrow.

The manager has religiously chosen Scott McTominay and Fred as twin pivots in a 4-2-3-1 formation for all but a few games this season.

However, with both players struggling for form and picking up knocks recently, there is evidence to suggest that the Norwegian may be contemplating a change.

If ‘McFred’ do start, Mason Greenwood is usually the attacking player most likely to drop to the bench, with Marcus Rashford switching to the right, Paul Pogba to the left and Bruno Fernandes and Edinson Cavani through the middle.

However, Greenwood was rested for United’s final Premier League game of the season against Wolves on Sunday, which could mean he is in the boss’s plans to play 90 minutes in Gdansk.

The 19-year-old certainly merits his place in the starting lineup and has been one of the Premier League’s most potent weapons in the last couple of months.

But Rashford, Cavani, Fernandes and Pogba are all surely undroppable, so something has to give, and that could be Fred, with Pogba moving into a central role ahead of McTominay and behind Fernandes.

It would be heartbreaking for Fred, who has manned the engine room of this United side admirably all season. But those 47 high energy outings may have taken their toll and he has looked slightly jaded in recent weeks.

The move would represent a gamble by Solskjaer as it would put more pressure on McTominay to single-handedly protect a leaky defence that will be without captain Harry Maguire.

On the other hand, it would throw down the gauntlet to Villareal, springing a surprise in the hopes of grabbing an early lead, with the Brazilian then potentially coming on later to help protect that lead.

With Maguire missing, Eric Bailly is expected to partner Victor Lindelof at the back although there could be another surprise there after Axel Tuanzebe’s impressive performance against Wolves on Sunday.

As for the goalkeeping position, at times this season it has seemed as if Solskjaer himself does not know who his best keeper is, but we think he will plump for the more experienced David de Gea on this occasion, with Dean Henderson set to be disappointed.

With all that in mind, here is our predicted line-up for tomorrow’s final: 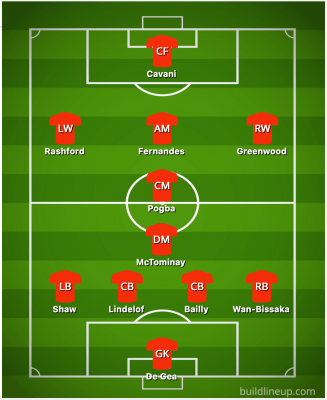