Home » Glazers beware: exclusive interview with a Not A Penny More movement organiser

Glazers beware: exclusive interview with a Not A Penny More movement organiser

A protest movement targeting Manchester United’s commercial partners, #NotAPennyMore, has grown into a major headache for the club’s controlling shareholders, the Glazer family, in recent weeks.

United fans’ disgust with the ownership is at an all-time high after it emerged that they had tried to take the club out of UEFA and into a closed shop private European league, the so-called European Super League, with eleven other clubs.

The coup failed, but events have made fans even more determined to oust the Glazers from United. Protests before the Premier League match against Liverpool on May 2nd saw the game postponed due to safety concerns.

But many fans recognise that protests alone will not be enough to remove the American tycoons from the club and although match-going and merchandising boycotts have been called for, they have been ineffective because there are too many fans who will still buy tickets and t-shirts even when the majority are boycotting.

The problem gave rise to a brilliant new initiative, the #NotAPennyMore movement, which aims to hit the Glazers where it hurts – at a corporate level.

In an exclusive interview with The Peoples Person, one of the organisers of the campaign, ‘J’, explained how it works.

‘The Glazers use the club’s commercial revenue for debt servicing and to pay themselves dividends. Sponsors are only too happy to use the fanbase to access lucrative commercial markets,’ he said.

‘The last thing they care about is the club or its supporters.

‘The simple idea behind the boycott is that those that enable the Glazer stewardship and perpetuate the club’s decline are just as complicit as the owners. Our aim is to engage in an active boycott to hurt the sponsors’ reputation and cause financial harm until they dissociate themselves with the Glazer family, thus weakening the Glazers’ hold over the club.

‘As the ‘United brand’ becomes more toxic the commercial revenue will begin to dry up and cause a cascade, thus hastening the owners’ removal.’

‘J’ said the response to the campaign has been incredible.

‘We think a lot of the support always felt that the best way to remove the Glazer family was through hurting their wallets, because we knew that the reason they remained owners was because the club was viewed as a cashcow, so there’s always been a small boycott movement over the years growing steadily.

‘With the fallout from the attempted ESL breakaway, the mainstream support have finally realised the Glazer family have engorged on the club for far too long.

‘We’ve been amazed with the response we’ve had announcing a commercial boycott, but we’re just beginning.

‘Our aim is clear: the Glazer family must leave the club. Until then, sponsors will pay.’

The organisers of the movement have chosen to remain anonymous and ‘J’ explained to us why this decision was made.

‘First and foremost the Boycott Movement Against the Glazers is a broad church. The bunch of us that know each other on here when we began campaigning against owners some years ago are a cross section of the United support with various personal opinions, everything from the manager and players, to recruitment and tactics.

‘Our views are as diverse as our fanbase, however we are all united under a single aim. Because of this, we try to keep individuals out of the Movement. In an already febrile and factional fanbase, we have personal opinions just like any Red, but can often be seen as polarising.

‘We are trying to build a broad coalition, the last thing we want is to be dragged into infighting that hurts no-one but the fanbase, and lets the Glazers off the hook.

‘After all, while we were at each other’s throats the Glazer family were secretly plotting to destroy English football. We need to be united, so the Movement is about creating unity over division.’ 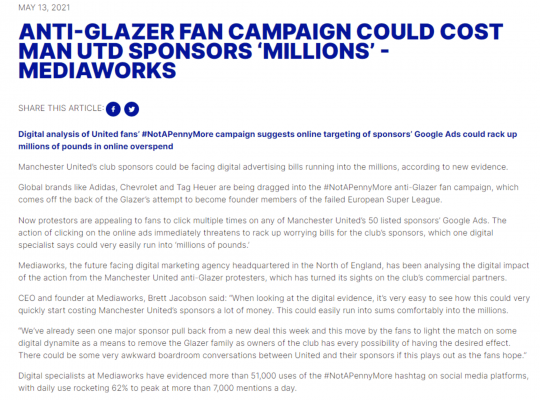 It was reported that the Hut Group recently pulled out of a corporate deal with United due to concerns of negative publicity. We asked ‘J’ whether he was surprised how quickly #NotAPennyMore got this fantastic result.

‘Initially we were surprised because the news came out of nowhere late on a Saturday night. Upon reflection it was less of a shock. Reds came together in an unprecedented way in the weeks before at Old Trafford to protest, and online to boycott.

‘When the Manchester United fan base unites there’s nothing that can stop us. That’s our power.

‘We should say we are naturally delighted by the immediate success, but we’re not resting on our laurels. One swallow does not make a summer, and there are plenty of swallows to come. We’re sure we will all pat ourselves on the back once more sponsors choose to leave or not renew. Until then we are energised and motivated to reach out to more Reds and hit more sponsors.

‘The Boycott Movement is only as strong as those that actively support it.’

United have a number of commercial partners and some of them are huge corporations, but that initial success has convinced ‘J’ that the campaign is moving in the right direction and that many more successes will follow.

‘There are some big challenging commercial partners but we are not daunted,’ he said.

‘Our aim is to hurt every one of them.

‘Clearly some are more vulnerable than others – we focus on using guerrilla tactics that disrupt the sponsors as much as possible, and each sponsor has their own level of tolerance to such levels of disruption.

‘J’ thinks that it may not even take another sponsor leaving to push the Glazers out if the pressure from the remaining partners becomes too great.

‘It’s possible that no sponsors leave but we hurt them enough to put unbearable pressure on the Glazer family to take steps to sell; or, it could be that a handful of partners leave the club, causing a collective loss in faith in the Glazers from remaining stakeholders.

‘How the end will come exactly for them we don’t know for sure, but we’re excited to find out. We’ve had successes already, so we want to see how far this Movement can continue to push this open door.’

We asked ‘J’ whether #NotAPennyMore would be fundraising to help the campaign to grow.

‘We have no plans at the moment to start a fundraising campaign. We are a bottom-up, grassroots organisation, but right now we want to show the power that lies in every single Red to make an impact without the need for fundraising.

‘We have the biggest fanbase in the world – it’s what Ed Woodward routinely uses to woo potential partners.

‘We want to turn our strength into their weakness. If we mobilise and come together we can end the ownership through our collective actions.

‘And what better story is there to tell? Greedy cartel family that used a historic football club to engorge itself is thrown out by supporters without a penny (well, almost!).

‘Besides, we don’t feel comfortable fundraising while we prefer to keep ourselves anonymous. If we do fundraise we want supporters to trust us by knowing us.’

So how can fans contribute? 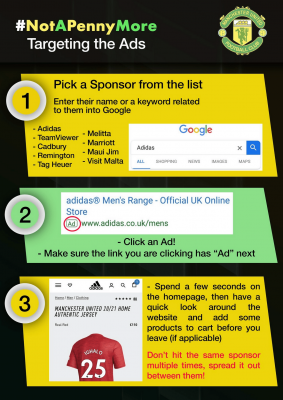 ‘The best way to contribute to the campaign is to be active in the campaign. We are a boycotting organisation but an active one. That means rather than just avoiding commercial partners’ products we seek to hurt them too.

‘You can still help out while not being tech savvy! If you are online you can still play a valuable role within the Movement. All you have to do is DM the official account for further information.

‘Any publicity against the sponsors – online or outdoors- is good publicity for us. The more supporters we can get playing a hands-on role the more successful we will be in accelerating the removal of the Glazer family from our club.

‘United front, collective effort, and proactive disruption are the three pillars that will determine how successful we will be – whether the Glazers will stay for another 16 years, or 16 months.’

‘ It doesn’t matter if you are a ‘Top Red’, a ‘LUHG’, a season ticket holder or someone who hasn’t had the opportunity to watch a game at Old Trafford. The only preconditions required are that you believe the Glazers must leave, and that an active boycott of sponsors is a legitimate and necessary strategy to deploy. If the answer to both is yes, we will work with anyone to save our club.’

Finally, we asked ‘J’ what is in the pipeline and what we should expect to see from the #NotAPennyMore movement.

‘We have plenty of ideas going forward. But I am sure you can understand we are keeping tight-lipped.

‘We rely on catching the club and sponsors off guard.

‘We are keenly aware the club tries to pre-empt any negative news. Historically, when the club sensed something contrary to their interests was developing, they often deployed transfer rumour stories as a strategic weapon to distract and deflect from negative news.

‘Just a few weeks ago as the pressure increased on the Glazer family we had no less than 12 news stories about transfers in the press in 3 days!’

To find out more about the #NotAPennyMore movement, to get involved and to do your bit to remove the Glazer family from Manchester United, here’s where to find them:

Calling all Reds!@Teamviewer and @TAGHeuer are sponsoring F1 racing teams today at Monaco.

Use #MonacoGP to attack the sponsors and expose their support for the Glazers.

You can also keep abreast of all Glazers Out activity on The Peoples Person’s #GlazersOut dedicated news and video page, here.

Bruno Fernandes: Manchester United man back to his...