David de Gea 2020/21 Manchester United Season Review: Does he still have a place?

Manchester United star David de Gea has had the most turbulent season of his career in recent history and fans have been debating his importance all year so The Peoples Person has taken a deep dive into how it all went down. 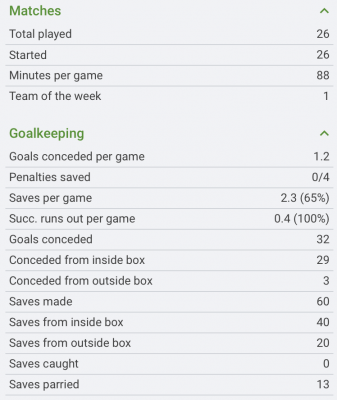 The statistics show De Gea’s performance in the Premier League and arguably the most notable one is the number of starts he had.

The experienced Spaniard played all 38 games in back-to-back seasons in the 18/19 campaign and 19/20 ones so for him to start in less than 30 matches shows the tide has turned on him.

This was the first time in a while De Gea’s number one spot was threatened and he failed to impress despite being given plenty of opportunities to.

In fact, it’s easy to argue Ole Gunnar Solskjaer stuck by the former Atletico Madrid man more than he should have.

De Gea also had plenty of time to reinvent himself under a new manager and prove his worth before Henderson even came back from his loan spell with Sheffield United.

The way the season ended for him, being the only player to miss his penalty in the Europa League final shootout vs Villareal, was really the culmination of how he’s been lately.

Questions about De Gea’s mentality have always been asked since he joined United and it’s safe to say he hasn’t convinced many in that aspect.

For the most part De Gea has been professional despite, at least from the outside looking in, not knowing whether his long-term future is at the club or not.

He hasn’t complained publicly and didn’t look to push for a move although he could have taken Henderson’s big new contract last summer as a hint that his time’s up.

Even if De Gea didn’t impress, he looked to take the challenge head-on and although weaknesses in his game still exist, he has reminded fans on occasion that his shot-stopping and reflexes are second to none.

He’s now also one of the senior-most players in the Red Devils’ squad and one of the few remaining Premier League winners so seeing him go would be quite the loss.

Sadly it looks like De Gea’s time at Manchester United is up, whether he’s replaced by Henderson or another goalkeeper, it’s difficult to imagine he’ll still be at the club after the summer is over.

He hasn’t convinced lately, his wages are sky high and he, according to reports, isn’t willing to play second fiddle next season.

Wherever he goes next though, that club will get a talented goalkeeper who still has a few years left in him and has the potential to regain the form that saw fans fall in love with him in the first place.

It’s been a bad season for De Gea and there doesn’t look like there’s hope for him to turn his career around at Old Trafford.

In the past, many clubs were lining up to sign him and would’ve taken him on board despite his expensive wages.

Now when United look open to selling, no one is keen despite a few top clubs looking in need of a goalkeeper.

Hopefully he will enjoy a better campaign next time around but it’s hard to argue he should be doing that at Old Trafford.