Dean Henderson has had an interesting start to his career at Manchester United and it’s safe to say he was in the limelight more than he would have liked this season. 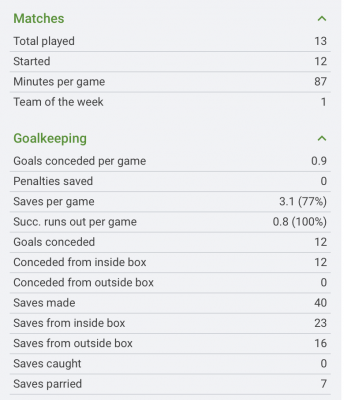 Henderson’s stats aren’t massively encouraging but they are better than David de Gea‘s and it could be argued it’s not his fault either.

United have had a shaky defence this season and it’s a compliment to the young Englishman that it’s looked less shaky when he’s between the sticks.

He’s conceded a little less than a goal a game in the Premier League and impressively hasn’t been scored past from outside the box.

Henderson’s also made more saves per game and has had more touches so he’s been very involved in the team’s play.

Henderson’s main negative is that he couldn’t finish the season as Manchester United’s undisputed number one.

He challenged De Gea and made him miss multiple Premier League games for the first time in recent seasons but it could be argued he didn’t quite do enough.

In fact, there have even been rumours floating around that United are looking into goalkeepers to invest in, with Atletico Madrid’s Jan Oblak being a name floating about.

This could see both De Gea and Henderson (if he doesn’t want to play second fiddle) sold so it’s not like he’s been the unbeatable force some people have raved about him as.

His positioning has also been found to be wanting at times and questions have occasionally been asked whether he could have saved a few shots that came his way.

The strongest positive is that Manchester United have looked more solid defensively when he’s played and that’s down to his commanding presence in the box and communication.

Everyone knows their roles when Henderson’s in goal and he helps settle a nervy defence when he plays sweeper keeper.

The academy graduate is also the first goalkeeper to really challenge De Gea for the starting XI spot, as Sergio Romero‘s moment of glory under Louis van Gaal was only ever going to be temporary.

It’s a credit to him that’s shaken up a senior, experienced goalkeeper in the Spaniard who has not played 38 Premier League games for the first time in three seasons.

Henderson has posed questions and provided some answers and is the catalyst for United’s biggest shakeup in the goalkeeping department in recent years.

A goalkeeper is simply not a priority for Manchester United this summer, regardless of the current chaos in that position.

De Gea’s age, recent form, and expensive salary should see him be the one to leave in the summer transfer window.

That should leave Henderson with the number one spot but even if the former Atletico Madrid man stays, one can expect the former to get more minutes than this season and continue his development.

Ole Gunnar Solskjaer‘s showed faith in him- handing him a new contract, playing him in high-stakes games and dropping De Gea for him.

Henderson can be happy in the way the season has gone and that he managed to experience a mini-breakthrough in the first team.

There are suggestions there could be more to come from him and he has impressed when he has played.

It may not be a major success but there has been progress in his career and there should be lots of excitement for the future.

Questions could be asked whether he’s done enough to earn the number one spot permanently but he definitely has done enough to at least deserve a real crack at it for a full season.

If he fails when given an extended period in the starting XI then he can have no excuses and Manchester United can search for their new number one elsewhere.