Victor Lindelof probably feels like Manchester United’s most undervalued player- he comes in, does his job, doesn’t make any major mistakes, and then at the end of the day, there are still a million fans and reports claiming he should and will be replaced.

The Swedish centre-back may look back at the past season and feel he’s done alright so The Peoples Person has looked into whether that’s true or not. 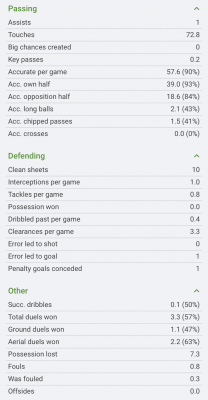 There’s no avoiding the obvious- out of Lindelof and Harry Maguire, the former is sadly the more expendable of the pair and that says plenty about his ability and the way his season went.

The former Benfica man is another player at United that falls into the category of ‘decent but probably not good enough for a title-winning side’.

The glaring negatives are his struggles in the air and his struggles with the physicality of the Premier League and sadly those are two crucial aspects of the game.

If he had a better challenger (or even one who could just remain fit for longer than a month) at Old Trafford then it’s likely he would have lost his place in the starting XI.

His weaknesses are often costly and his strengths are never quite strong enough to justify his weaknesses so he ends up looking like an average player.

Lindelof’s had a long audition at centre-back alongside Maguire and sadly he hasn’t justified to Ole Gunnar Solskjaer why he should remain the club captain’s partner for the future.

Lindelof’s mental attributes are what makes him a good defender- he reads the game well, is a clean tackler, and prefers delaying the opponent and forcing him back rather than sticking a leg in and conceding a foul.

He always seems to be in constant communication with his teammates and organises his defenders better than most like to give him credit for.

Yes he hasn’t been challenged enough for his position but he has ensured he is always fit, available, and avoids putting in stink-filled performances that some of his colleagues have.

Lindelof’s ability on the ball is also a little underrated- he passes well, rarely gives it away, and as seen by the SofaScore stats above, he plays it forward plenty.

Although he’s not quite good enough physically or in the air, he’s actually improved in that aspect of his game and that’s a credit to him and the coaching staff.

Unfortunately there’s a strong possibility Lindelof will lose his starting XI spot to someone Solskjaer will bring in this summer, with names like Raphael Varane and Pau Torres being floated about.

The problem is, even if no one comes in and the 26-year-old keeps his spot in the team, it’s likely he’ll just be replaced at the next opportunity instead.

That says a lot about Lindelof and it’s difficult to imagine him suddenly hitting a higher level and becoming indisputably one of the league’s best.

If someone does come in, one would imagine Lindelof would not accept a bit-part role and perhaps he would look better and be better appreciated in a league such as the Spanish one where the game isn’t so physical.

The score does feel a little harsh but sadly Lindelof’s only been decent and nothing more.

He hasn’t pushed his career forward or necessarily progressed in a way that would convince people he should be anything more than a very good backup.

He’s had plenty of minutes on the pitch and yet doubts remain over his future at Old Trafford.

It’s hard to argue it’s been a good season for Lindelof as he’s more or less in the same position as he was at the start of it.

Antony at Ajax but missing from training amid...