Eric Bailly is one of Manchester United’s most frustrating players and largely for a reason that’s somewhat out of his hand- his fitness.

The Ivorian defender is often considered to be one of the club’s better centre-backs and yet has failed to establish himself as a regular starting XI player over the course of his time at Old Trafford.

This summer makes it five years since Bailly joined United from Villareal and yet he’s not much better off than that debut season. The Peoples Person takes a look at how this campaign went. 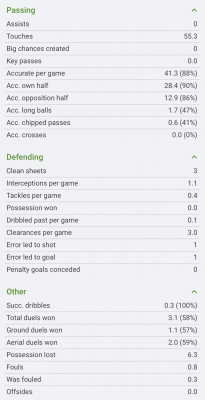 As mentioned above, Bailly’s biggest negative is his inability to remain fit over an extended period of time.

His constant injuries mean his managers, both on a club and international level, can never truly rely on him.

A key attribute of any player is their availability, if a manager knows they can call upon someone at any point during the hectic season, then that’s instantly a positive.

In fact, it could be argued Bailly’s proneness to injuries is the only reason why Victor Lindelof is ahead of him in the pecking order and why Manchester United are still looking to purchase a centre-back this summer.

The former Villareal man also has a tendency to be rash or unpredictable in his defending but it’s something that has improved the older he’s gotten.

Bailly is essentially the perfect, modern centre-back- he’s pacy, physical and can pass better than most give him credit for.

He’s also aggressive, can win his aerial duels and isn’t afraid to stick his foot in where it hurts (which is probably why he picks up injuries all the time in the first place).

Up until recently, he was also happy to fight for his place in the starting XI and met the challenge of Harry Maguire and co well.

It’s also believed he’s a positive influence and presence in the dressing room, which can only be a good thing for the whole squad.

Bailly has only recently extended his contract but he has sent a warning to Ole Gunnar Solskjaer he’s not going to accept a bit-part role next season.

However, he’s not really in a position to make demands given his history and how the club are keen on bringing in a new centre-back.

It’s more likely Bailly will leave this summer than him suddenly being handed an undisputed starting XI spot.

The most realistic scenario is that he will pick up where he left off last season, potentially fail to convince with his unreliable fitness before leaving in January due to a lack of minutes.

The big question in any season review is- has there been any progress in the player’s career or has he developed in any sense.

Unfortunately for Bailly, the answer is no to both and it’s difficult to think of any standout moments for him in the past campaign.

He’s filled in on occasion but his roughly 1700 minutes of football across all competitions is simply not good enough.

The centre-back position alongside Maguire is open for someone to take advantage of and he couldn’t rise to it due to his lack of fitness.

It’s tough to imagine him turning his career around at Old Trafford and many had predicted he would be moved on this summer before he renewed his contract.

Erik ten Hag rings in the changes at...