Alex Telles must have been left scratching his head at Manchester United after the season he just experienced.

The talented defender joined last summer probably believing the left-back spot was his but he’s had the rug pulled out from underneath him.

After all, Ashley Young left United, Brandon Williams didn’t have enough about him to challenge, and Luke Shaw still looked only a slightly above average player.

Below, The Peoples Person will take a look into what happened with Telles the past season and what might happen in the next. 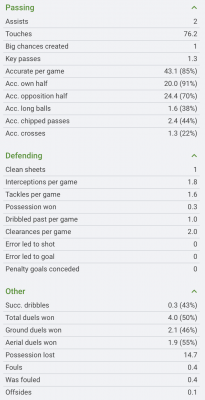 Sadly Telles hasn’t shown Manchester United fans the player he was at Porto and so he hasn’t lived up to the hype.

Shaw is a rather complete full-back now and can hold down the left-flank completely by himself, which is something the Brazilian defender can’t do just yet.

His defending is found wanting at times and he’s not quite physical or good enough in the air.

He clearly needs time to adapt but there are concerns he may never get used to the intensity of the Premier League, after all, he has played roughly 2000 minutes across all competitions.

Telles is clearly a talented player and his attacking qualities are sensational, which is evidenced by his ability to get two league assists in just a handful of games really.

He’s a set-piece specialist and got a wonder of a left foot which he will only really begin to exploit next season onwards.

Telles doesn’t lack pace, is good on the ball, and is comfortable carrying it forward in a way that normally a winger would be.

Although this is only an indirect positive, his presence alone turned Shaw into the force he is today, which is what is needed at United.

Even if he doesn’t improve or adapt anymore, he’s proven he can be a useful squad player and that is already meeting what was needed of him.

Although there have been reports that Manchester United are looking to sell him, Telles has insisted publicly that he’s happy where he is.

A season of adaptation is normal and not something fans should be concerned about unless it continues in the upcoming campaign too.

It’s more likely Telles will kick up a gear and show his true talent as he’s not quite done challenging Shaw just yet.

The sensational Englishman will need to make sure he keeps up his form and keeps the former Porto man out of the starting XI because the second he slips, he will be overtaken.

It has been an ok debut season for Telles and there are hints of a talented player in there.

At the very least he deserves another campaign to prove himself and United could always move him on next summer instead when there may be more money floating around.

At the minute he’s exactly what the club needs and although he hasn’t taken the league by storm, he can be excused for the lack of consistent minutes.

He’s not done bad enough to warrant less than a balanced score and he hasn’t done more to warrant more either.

He’s done precisely what he was brought in to do (albeit indirectly)- solve the left-back problem.

Manchester United linked with everyone this week –...

Ruud Gullit: Manchester United are not the main...