Paul Pogba is one of Manchester United’s most debated over players ever since his return back in the summer of 2016.

The French talent was signed for a then world-record fee and so massive expectations were placed on his shoulders.

Whether he’s met those expectations or not is a debate for another day as The Peoples Person will focus on how he’s done over the past season. 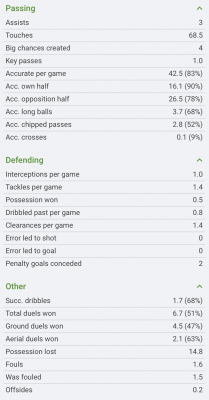 It’s difficult to think of any negatives for Pogba. He’s a physical and technical specimen and even a rare type of midfielder.

The main issue fans had with him is how often he, his agent, or those around him spoke out about a potential move away and thus disrespecting the club.

However, it’d be unfair to say that without pointing out that kind of stuff has reduced considerably under Ole Gunnar Solskjaer‘s tenure.

Another potential negative is Pogba’s inability to defend and how it’s left the legendary Norwegian confused as to where to play him which has led to the player playing in several different positions this season.

Although he’s had a decent season he hasn’t had a phenomenal one and for a world-record fee, you would expect more sadly.

Pogba’s ability to control games is what separates him from United’s other midfielders and when he’s on the pitch, everyone around him improves.

Fans felt his absences when he struggled with injuries and learned to appreciate the type of player he is more.

Gone are the expectations for him to score or assist every game and now supporters look to him to provide a good platform for others to succeed upon.

Pogba’s also proven to be versatile this season- playing at defensive-midfield, central-midfield, attacking-midfield, and both flanks.

His performances haven’t really suffered either and some fans were enjoying his displays as an unorthodox left-winger.

Pogba might not even be at Manchester United when the next campaign begins given how his contract runs out next year and there’s been no talk of a renewal.

If he leaves, it’s likely whichever club he goes to will build around him more than United have done and so he will likely flourish.

Solskjaer’s current system facilitates Bruno Fernandes more and given Pogba’s uncertain future, it made sense to bet more on the former.

Nonetheless, if the academy graduate does stay, he will likely excel in central midfield only if an adequate player is brought in alongside him.

If Jadon Sancho is signed, there’s no longer room for Pogba on the flanks or anywhere in the Red Devils’ front four really.

Solskjaer moved fast in indirectly replacing him with a combination of Bruno and Donny van de Beek and that has left him almost forced to accommodate the rest of his teammates.

Pogba’s had only a little better than a decent season and that’s down to a combination of things, some of which are in his hands and others that aren’t.

If controlling a game is his main strength now then it’s easy to think of a few key games for Manchester United in which control would have been needed but wasn’t achieved.

If he’s not grabbing goals and assists regularly but is being moved around all over the pitch then it’s tough to identify exactly what kind of role he’s meant to do.

Given he was bought for €105m according to SofaScore then this simply isn’t good enough, regardless of which party is to blame.

Pogba would undoubtedly be a big miss if he leaves this summer but it says a lot about him that Manchester United are more prepared than ever to replace him and it would potentially give the team even more balance.