There are no doubts Bruno Fernandes is Manchester United’s best player of the year but it’s still worth reviewing how his season went.

The Portuguese magician is loved by all fans and there are hardly any complaints about him either as a player or person.

Supporters are constantly fawning over him for what he does on the pitch and what he says off it and it’s safe to say he’s United’s talisman. 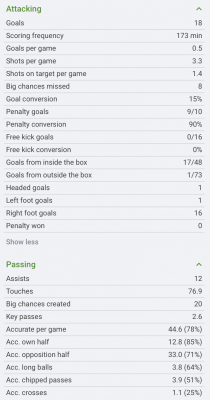 Truly there are hardly any negatives and the ones Bruno does have, his positives far outweigh them that they become relevant.

The main complaint is how wasteful the former Sporting Lisbon man, as evidenced by his 78% pass completion rate in the league.

Against deep, defensive teams his risky passes are outstandingly useful but in matches when United are playing on the counter and need to retain the ball a bit better, it can prove to be detrimental.

Bruno ends up giving the ball away easily and losing control of the match as the team struggles to build up any form of steam.

Other minor negatives might be his lack of pace or physicality but neither are exploited by rivals and he makes sure to use his teammates’ abilities to make up for it.

Bruno’s a risk-taker and that’s why his passing completion rate is so low for a midfielder but it’s proven far more useful than troublesome.

He’s gotten double digits in goals and assists in a team that was struggling for form so often.

It’s clear he’s also a leader and helps raise the ceiling of the team to greater heights; United are just not the same without him.

His passing is underrated as well as his intelligence and sacrifice on the pitch- he’s often willing to rotate with his teammates to cover for them when they attack.

Simply put, there’s a reason why Bruno was compared to club legend Eric Cantona and that’s as high praise he’ll ever get.

Fans can expect Bruno to continue to light up the league and for his numbers to get even better as he hits the peak of his career.

If Manchester United do their job and invest in the first-team then he’ll be playing alongside better players who he will be able to help even more.

Ole Gunnar Solskjaer‘s built the system around Bruno so there are no doubts over whether or not he can continue to improve.

His position at the club is safe and he’s even expected to sign a new deal despite just arriving a little over a year ago.

It wouldn’t be a surprise to see him grab over 20 goals and over 20 assists across all competitions.

There are only two things stopping Bruno from getting a perfect score- the lack of trophies to his name and his form.

Bruno may have had a brilliant individual season but he couldn’t drag his team that little step further to glory.

Of course, he’s not to blame for the performances of his teammates but such are the expectations of a talisman.

For a large part of the campaign, his form was sensational but it could be argued he did dip at times to prove he’s human.

When the spotlight was on him to save United in the Europa League final vs Villareal, he was just as bad as any of his colleagues.