Edinson Cavani is one Manchester United player who can hold his head up high over how his season went, though it’s safe to say he had to fight for it to happen.

The experienced Uruguayan finished the season in third place of the club’s top goalscorers, grabbing 17 goals across all competitions in roughly 2200 minutes of football.

With his six assists as well, this equates to 23 goal contributions in about 24 matches worth of football and given all the doubts before he arrived, it’s something he can be proud of. 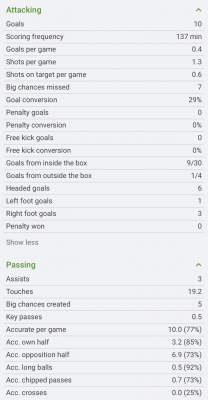 Unfortunately, Cavani’s negatives are things that are out of his control a little- his age and fitness.

The former PSG man looked to be finished at United at one point as he was frustrating fans with how consistently he was out of action due to injuries, particularly at a time when the club needed him due to Anthony Martial‘s own absence.

No matter how good Cavani is, his age is undoubtedly a factor as it’s tough to build on any success he has as it could be fleeting or short-termed.

Not really being keen on staying in Manchester is a minor negative, although it was understandable given his personal circumstances.

Despite Cavani’s fitness issues, he rose from the ashes, got fit, and remained fit for the rest of the season to claim the striker spot for himself undisputably.

His experience and mentality has proven useful to the squad overall, though particularly those on the younger side.

Cavani’s a rather complete striker, though his most admirable attributes are his movement and deadly finishing.

It also helps that he’s a remarkably hard worker and is happy to sacrifice himself for the good of the team if need be.

Despite enduring a difficult period, he still managed to get into such good form that he had Ole Gunnar Solskjaer claiming United have missed the type of striker he is for a while now.

The good news is that Cavani is staying and it would be a surprise if it’s more than just the next season.

He still has plenty to offer and will likely continue to wrestle Anthony Martial for the striker position (and potentially win it again).

With a proper pre-season under his belt, Cavani should once again finish quite high up on the club’s goalscoring list, even if he only plays as a substitute.

After all, he started his career at Old Trafford coming off the bench and was scoring so many goals he eventually had to be given the nod for the starting spot.

It’s likely Cavani will start the season strong, potentially struggle with the fixture pileup in winter, and then perhaps see his minutes dwindle towards the end with his contract coming close to ending and Martial probably winning his spot back.

There’s a reason why Cavani quickly became a fan favourite and why he won over the doubters who questioned his transfer.

He’s more than proven his worth and ended up being United’s signing of the summer despite the likes of Donny van de Beek and Alex Telles joining with plenty of excitement.

Cavani was only expected to play a bit-part role and instead blew everyone away with his performances and ending the season with a respectable amount of minutes.

His form was a pleasant surprise and the main reason why Solskjaer was practically begging him publicly to stay.

United will eventually address their weakness in the striker position but until then, fans can enjoy Cavani’s greatness.