Manchester United star Daniel James has given Ole Gunnar Solskjaer something to think about after yet another impressive performance for Wales.

The young winger has been tearing it up in the Euros so far for his nation and will be hoping his club manager is watching closely.

James is a controversial figure at United as fans are split over how useful he is to a star-studded squad.

Marcus Rashford is Solskjaer’s first-choice left-winger and it’s near impossible to displace him, and yet the Welsh attacker is tasked with doing so.

James’ versatility has meant he’s often been forced to play on the right-wing instead but it seems he’s showing he’s at his best from the left-wing. 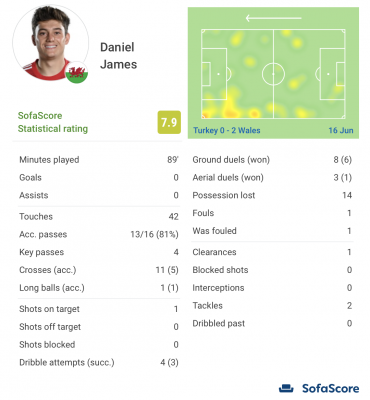 One fan summed it all up perfectly:

Can’t lie, I do have a soft spot for Daniel James. Obviously has to improve a lot to his game, but I just can’t force myself to dislike someone who works so tirelessly in every match that he plays for Man Utd & Wales. Gets far too much unfair stick..

He may also, somewhat rightly, feel Solskjaer isn’t using him to the best of his abilities.

James has proven time and again he has certain qualities no one else in the squad has and his youthfulness means he can still improve further.

If given a real chance, he can prove he’s a needed squad player at worst and a starting XI challenger at best.