Home » Fred: How Brazil’s Tite has made better use of Manchester United star

Fred: How Brazil’s Tite has made better use of Manchester United star

Manchester United’s Fred has received plenty of praise for his performances for Brazil in the Copa America so The Peoples Person has taken a look at his statistics.

The tenacious midfielder splits fans in regards to whether or not he should be a starting XI regular for Ole Gunnar Solskjaer.

The legendary Norwegian’s preferred partnership in midfield has often been a combination of Fred and Scott McTominay.

This obviously resulted in a lack of creativity and United struggled to break down stubborn opposition defences regularly.

With Brazil, Fred‘s positives and negatives are different and he’s certainly been a regular for Tite who has relied on him. 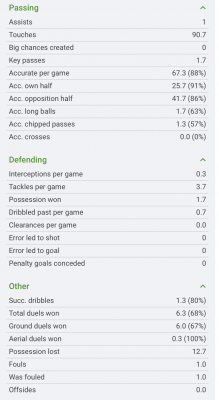 The Peoples Person previously reviewed Fred‘s season with the Red Devils and it’s safe to say he was brilliantly erratic.

The differences, statistically speaking, between the former Shakhtar Donetsk man’s performances for Brazil and Manchester United are minimal.

He’s played in a 4-4-2 and a 4-3-3 for his country but has benefitted from seemingly being the one who’s given the freedom to roam and play more box to box.

For example, against Venezuela, he played alongside Casemiro and Lucas Paqueta in midfield so he certainly wasn’t doing the sitting.

Against Peru and Colombia, he played alongside Fabinho and Casemiro respectively, and both players are typically their club side’s defensive midfielders.

It’s no surprise to learn Fred is better when he’s shielded more, as most Manchester United fans would argue he was never a sitting or defensive midfielder in the first place.

Whether Solskjaer takes not or not remains to be seen but it wouldn’t be surprising to see him stick to his prefered 4-2-3-1 and shove Fred into the double pivot supporters saw all of last season.