Manchester United fans watching Victor Lindelof play for Sweden at the Euros may be left scratching their heads after his fine form.

The former Benfica man has been one of the key reasons why his nation topped a group that included the likes of Spain, Slovakia, and Poland.

In fact, Lindelof has performed so well that had he not already been a United player, supporters probably would have wanted the club to sign him.

Ole Gunnar Solskjaer has been on the lookout for a centre-back all summer and names such as Raphael Varane and Pau Torres have been floating about.

It could be argued neither have outperformed Lindelof at the Euros so The Peoples Person has taken a dive in to look at his statistics. 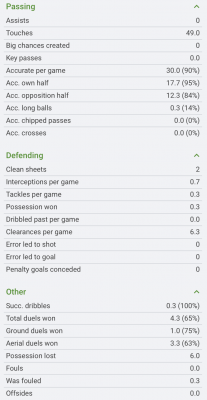 The Peoples Person previously reviewed Lindelof’s season for the Red Devils and it’s safe to say it’s worse than if he was being judged purely on his Sweden performances.

This shows how Lindelof is used for Sweden as he’s expected to be on the ball less and in some senses read the play less.

However, he is expected to win his challenges and he does that spectacularly, although it is ironic that it is the very thing he’s criticised for at Manchester United.

The only logical explanation is due to Sweden’s counter-attacking and hard-working style of player, Lindelof is far more protected and so looks better off than how he is often left exposed at Old Trafford.

Unfortunately for him, United are always going to be an attacking team that plays on the front foot and they’re not going to protect him any more than they currently do with Scott McTominay and Fred.