Manchester United have been linked with numerous defensive midfielders, such as Wilfred Ndidi, Ruben Neves, and Declan Rice, and for good reason.

Unleashing the talents of Paul Pogba and Bruno Fernandes was always going to require some solidity behind them to make it happen.

That doesn’t even include the likes of Marcus Rashford, Anthony Martial, Edinson Cavani, and Mason Greenwood, let alone the potential newcomer Jadon Sancho.

It could also be argued, quite easily, that none of them other than the experienced Serbian is a natural defensive midfielder. 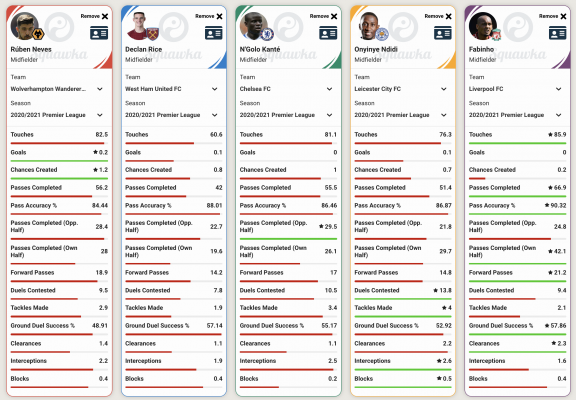 Unfortunately, Matic is past his prime and doesn’t provide the same type of high-level solidity as he did in his younger years.

As can be seen above, Liverpool’s Fabinho excels most in certain attributes but it could be argued that Neves is the more all-rounder of the whole group.

Interestingly enough, the Portuguese midfielder is probably more available now than he’s ever been during his time at Wolves.

United have been linked but only weakly, despite some fans demanding that the club should pounce at the opportunity to sign him.

After all, Ndidi and Rice will be expensive acquisitions even if they’re somehow available, whereas Chelsea’s N’Golo Kante is untouchable.