Manchester United manager Ole Gunnar Solskjaer is set to break up the ‘McFred’ midfield partnership in the coming season as he switches to a 4-3-3 formation.

According to ESPN, the manager has told players returning for pre-season training that he intends to adopt a more attacking formation which would mean that the double pivot of two defensive midfielders will be replaced by one.

It is a ‘move that could spell the end for the midfield partnership of Fred and Scott McTominay,’ according to ESPN’s sources.

The midfield partnership was Solskjaer’s go-to anchor in 28 games last season but there was some criticism among fans and pundits that it restricted attacking options, especially against weaker teams.

‘The United boss is hopeful the new set-up will allow him to include Paul Pogba or Donny van de Beek alongside Bruno Fernandes more regularly,’ ESPN claims.

Many observers, including the writer of ESPN’s article Rob Dawson, noted that the ‘McFred’ partnership was born at half-time in United’s humiliating 6-1 home defeat to Spurs last September and it seemed as if Solskjaer saw the pair as the safe option from them on.

Neither player is a natural holding midfielder. Fred made his name as a box-to-box player and McTominay in a central-attacking midfield role. This meant that, arguably, the two were needed at times to do the job of one world class, specialist DM.

The Red Devils are reportedly keen to strengthen in that role this summer although their top target, West Ham’s Declan Rice, has been valued at £80 million by the Hammers, which is a figure way above united’s budget.

A swap deal involving Jesse Lingard could bring the price down but it is still a long shot.

If United do not manage to bring in a specialist this summer, it remains to be seen whether it will be McTominay or Fred who gets the nod in the new formation, which without further signings could look something like this: 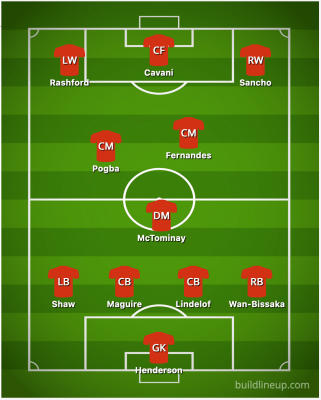 The new formation will be good news for the likes of Donny van de Beek, Anthony Martial and Mason Greenwood, who will have one extra forward position to aim for when the manager rotates his side. It will also be good news for fans who prefer the Red Devils to play a more attacking game.