Phil Jones and Anthony Martial remain sidelined with injuries and while Donny van de Beek has been photographed training recently, it is unclear from reports as to whether he has sufficient time on the grass to be able to take part today.

Eric Bailly and Amad are representing the Ivory Coast at the Olympics.

Marcus Rashford is set to undergo surgery after his holiday and is not expected back until October.

Jadon Sancho has not yet been confirmed as a United player and is, in any case, on holiday.

Tom Heaton might also make a first appearance since rejoining the club although it is believed that Dean Henderson has resumed fitness and will probably start in goal.

We could see a back four of Wan-Bissaka, Tuanzebe, Mengi or Fish and Telles or Williams.

The other of those last two – Telles or Williams – could play ahead of the other on the left wing.

Nemanja Matic is the natural choice for holding midfield and it will be a good chance for Solskjaer to examine the progress of either or both central midfielders James Garner, after his season on loan at Watford and Nottingham Forest, and Andreas Pereira after his season at Lazio.

Greenwood is likely to lead the line, with Jesse Lingard and Juan Mata also starting and more of the younger players being brought on at half-time.

With that in mind, here is our predicted line-up for today’s game: 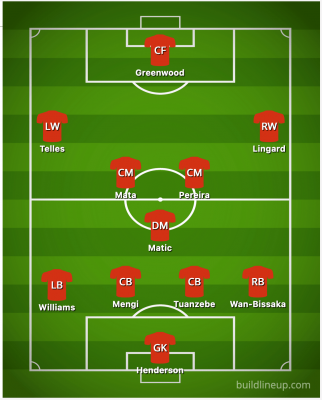 Erik ten Hag rings in the changes at...