As we enter another pre-season, the showground for young academy talents looking to make their mark in the first team, we look back at the minutes handed out by the Premier League’s top 8 clubs in the 2020/21 season as per Transfermarkt. 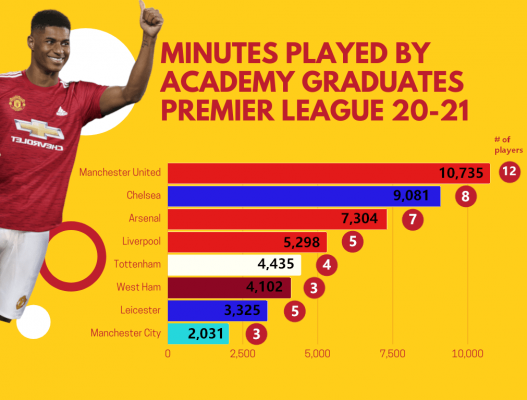 Topping the list by no surprise is Manchester United with 10,735 minutes, spread across 12 players. Contributing the most to this is Marcus Rashford with 2,923 minutes, while u23s club captain Will Fish comes in at the bottom with 1 minute.

The Manchester club famed on its academy and youth focus has made history with the Busby Babes and the Class of ’92, but the current days under Ole Gunnar Solskjaer are shaping up to be no different, with the manager maintaining the heart of United’s identity.

Handing out four debuts in the league, and making graduates Rashford, Scott McTominay, Paul Pogba, Mason Greenwood, and Dean Henderson first team regulars, Ole has ensured to keep the tradition alive of having at least one academy product in the matchday squad since 1937.

The only club running Manchester United close is Chelsea with 9,081 minutes, after seeing a recent emergence of youth talent under the guidance of Frank Lampard.

Having arguably the strongest academy in the world, Chelsea have dominated youth level in the recent past. Bringing home seven FA Youth Cups since 2010 and two UEFA Youth Leagues, Chelsea have turned into a dominant force at the underage level.

It was not until under Frank Lampard did the London club start to see the fruits of their labour in the first team however. After a large injection of youth players into the first team, notable mentions are Mason Mount and Reece James who make up 5,259 minutes and have solidified their spots even under new manager Thomas Tuchel.

With the recent sale of Fikayo Tomori, loan of Billy Gilmour, and rumoured sale of Tammy Abraham, it is yet to be seen if Chelsea will continue their impressive youth integration under Thomas Tuchel.

Early signs of trouble are showing though with big talents in Tino Livramento and Lewis Bate turning down contracts, as the faith in the pathway to the first team is not there.

On the other end of the table, Manchester City clock in at the bottom of the eight clubs with only 2,031 minutes handed to three players, with Phil Foden receiving the majority.

Despite City’s heavy investment in the academy, with their shiny Etihad campus and expensive private school partnership with St. Bede’s, City have yet to see much of an imprint made on the first team.

After Foden, Eric Garcia was handed the most minutes with 380 but City have just lost the Spanish youngster as he returns home on a free transfer. Meaning as yet, Pep Guardiola has failed to replicate the youth success he oversaw at Barcelona.