After a useful outing against Derby County at Pride Park last week, United will be looking to integrate a couple more internationals who have returned from holiday, including Scott McTominay and Daniel James.

Dean Henderson has also been back in light training although, as with McTominay, it is unclear whether he will have been put through his paces sufficiently to take part. Tom Heaton may therefore continue after his excellent game against the Rams.

Tahith Chong and Will Fish have both been at the Pennyhill Park training camp this week but both have now secured loan moves to Birmingham City and Stockport County, respectively, which may push them down the list of candidates for a starting berth.

There are then several other possible loanees, including Brandon Williams, Teden Mengi, Axel Tuanzebe, James Garner, Ethan Galbraith, Dylan Levitt, Facundo Pellistri, Shola Shoretire, Hannibal and Joe Hugill, all of whom will be hoping that they can use the opportunity to convince.

Reports today suggest that manager Ole Gunnar Solskjaer may be reconsidering a loan for Pellistri after his exploits at Pride Park so he might well give him a start to take a closer look.

In terms of predicting the starting XI, therefore, the question is whether Solskjaer will prioritise fitness for those he knows he will be using in the forthcoming season or trialling those about whom he is undecided.

Another factor to consider is that reports claim United will be moving to a 4-3-3 formation this season and this will require a strong defensive midfielder to protect the back line.

This would tend to favour a start for either Matic or McTominay, with the likes of Garner, Galbraith, Levitt and Pereira, or even perhaps Mata, Lingard, Shoretire or Hannibal, jostling for the other two more advanced positions.

If Pellistri does play on the right flank, then either Dan James or Hannibal, who likewise showed some class against Derby, will probably play on the left.

With Mason Greenwood almost certain to lead the line again, this then is our predicted line-up for the game: 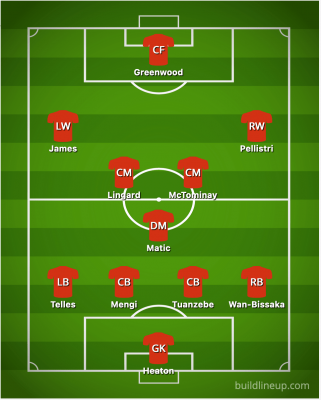