The game will provide another chance to evaluate some fringe players while allowing senior squad members to gain valuable match fitness ahead of the new season.

Manager Ole Gunnar Solskjaer has said that Diogo Dalot and Scott McTominay are back in training but will probably be on the bench.

Dean Henderson is back in training but will not be ready.

Bruno Fernandes has also returned to training but it will be too soon for him to take part.

Alex Telles is definitely out after sustaining an injury in training and the remaining players that played in Euro 2020 and the Copa America have not yet returned from holiday.

The team selection will once again therefore boil down to how much Solskjaer prioritises getting first team regulars fit versus taking a look at youth and fringe players in order to evaluate them and, potentially, place them in the shop window for loan moves or transfers.

Against QPR last time out, the boss started with a fairly senior side, substituting in the younger players in the second half. However, their superior performance to the seniors might mean that a few get to start.

We think Anthony Elanga might get a start after impressing on Saturday, although Facundo Pellistri has also been performing very well in pre-season so far.

Will Fish might be given a start ahead of Tenden Mengi at centre back although his imminent move to Stockport might mean that there is little advantage to working on his fitness at this stage.

We therefore think that Ole will persist with the Tuanzebe-Mengi partnership, with Aaron Wan-Bissaka at right back and Brandon Williams at left back.

The most senior starting XI remaining would therefore be a midfield three of Matic, Pereira and Lingard, with Dan James on one wing and either Elana or Pellistri on the other, with Mason Greenwood leading the line again.

With all that in mind, here is our predicted starting XI for the game: 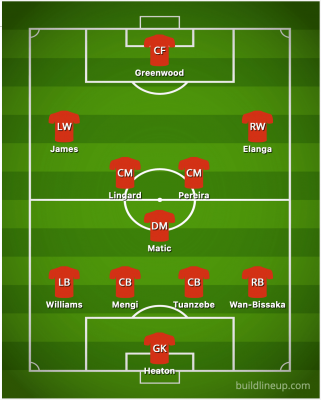