Ole Gunnar Solskjaer is expected to pick a team for tomorrow’s friendly against Everton that is close to the eleven he plans to start in the Premier League against Leeds United the following Saturday.

David de Gea will almost certainly start in goal, with Dean Henderson being unavailable due to post-Covid tiredness.

At right-back, Aaron Wan-Bissaka picked up a knock during the week so could be rested. Diogo Dalot, Brandon Williams or Axel Tuanzebe could deputise.

We expect to see the regular partnership of Harry Maguire and Victor Lindelof restored at centre-back pending the completion of Raphael Varane‘s transfer, with Luke Shaw probably fit enough to return at left back. Alex Telles is out for the month with a foot injury.

Solskjaer hinted yesterday that he expects Fred to start the season so if available, he will probably be given minutes alongside Scott McTominay in midfield. If not, Donny van de Beek will probably deputise.

Anthony Martial could lead the line after training all week following a long injury lay-off. This could see Mason Greenwood returning to the right wing and Paul Pogba occupying an advanced left midfield position.

It is unclear at this stage whether new signing Jadon Sancho will play any part. Conflicting reports have said he will start training for United today or on Monday. If he does train today, then he may well get some minutes at Old Trafford tomorrow, but it is likely to be from the bench.

Another question mark is over Jesse Lingard. Solskjaer has hinted he wants to keep the England man at Old Trafford this season and might feel pressure to award him a starting berth to reassure the player that he is genuinely in contention for a start next week.

As far as we are aware, Edinson Cavani, Eric Bailly and Amad have still not returned to training following their exploits in the Copa America and Olympic Games, respectively.

Marcus Rashford is undergoing shoulder surgery and will definitely be unavailable until October.

Here, then, is our predicted XI for tomorrow’s 12.45pm kick-off: 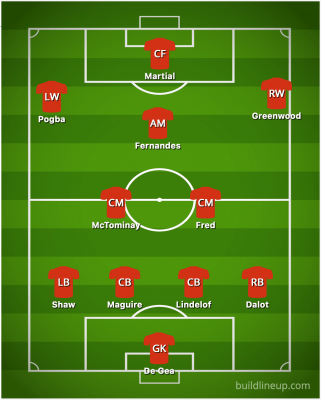