Manchester United’s club captain, Harry Maguire, and manager, Ole Gunnar Solskjaer have both spoken glowingly of new signing, Jadon Sancho, in interviews with Sky Sports ahead of their Premier League opener against Leeds United on Saturday.

The pair outlined what they feel the 21-year-old England international winger will bring to the club.

Solskjaer mentioned that Sancho is still at the start of his football career but at the same time is “very experienced, going to Dortmund as early as he did.”

He went on to say Sancho is “one of the most creative forwards in European football. He’s so smooth, scores goals, creates goals, very excited to see him and hopefully help him develop his career.’

Sancho left Manchester City’s youth squad in 2017 to join Borussia Dortmund, and after long-standing interest, Man United captured his services this summer for a fee of £72.9 million.

Maguire touched on the drawn-out negotiation process saying, “it felt a bit like my transfer when I was joining Manchester United, where it just didn’t happen one season and the following season we managed to get it over the line.”

That transfer frustration has been common in recent years and may point to a deeper issue, although having recently appointed Director of Football, John Murtough, fans will hope that United can be more efficient in the future.

Maguire went on to focus on the positives with Sancho, saying, “He’s an exceptional talent. Obviously, he’s the type of player, with the confidence which he has, that he can be a real star for this club, and I feel like, in the future, in the success that we have, he’s going to have a big part to play.”

Sancho’s last season at Dortmund started sluggishly and was perhaps impacted by a transfer to Manchester not happening despite negotiations.

Even though that slow start was the case, he still managed to rack up 8 goals and 11 assists in 26 Bundesliga games. 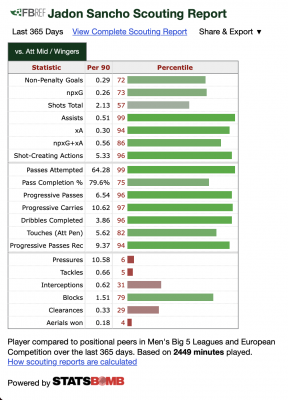 Sancho may still take some time to settle into the Premier League’s intensity and fans should be patient, but once he clicks, United should have a bright talent in their side.

Solskjaer has shown that he backs young players and likes to employ a fluid attacking front four and if United are to seriously push for silverware, Sancho will likely pop up all across that frontline with impact.