Manchester United manager Ole Gunnar Solskjaer is expected to give new signing Jadon Sancho his debut for the club against Leeds United tomorrow, either from the starting XI or from the bench.

The manager himself has already stated that it would be from the bench but he could change his mind after a positive week’s training from the England man.

The back five practically picks itself for the game. Dean Henderson is still recovering from the effects of Covid and so David de Gea becomes the automatic choice in goal.

Raphael Varane’s transfer has taken longer than expected leaving him only two days to train with the side, so Victor Lindelof will almost certainly partner Harry Maguire in defence, with Aaron Wan-Bissaka and Luke Shaw in the full-back roles.

Alex Telles, in any case, is injured and unavailable.

Paul Pogba, Bruno Fernandes and Mason Greenwood are all but certain to start, but that is where the picture starts to become murky.

While neither of them have featured much pre-season and despite rumours that the boss wants to switch to 4-3-3, they will probably be reinstated for this game at least.

If not, Nemanja Matic is another option after an impressive pre-season.

Edinson Cavani has only just returned to Manchester so is unlikely to start, and Anthony Martial as only played 45 minutes of football since March.

The most likely scenario, then, is for Greenwood to play up top with Pogba wide left and Sancho on the right wing.

This, then, is our predicted XI for tomorrow lunchtime’s Premier League game: 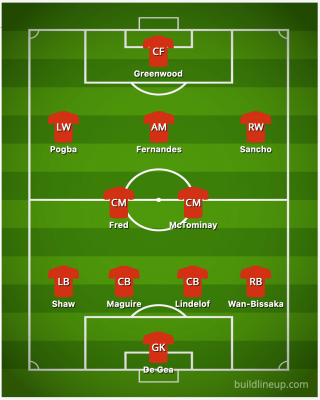 Manchester United issues club statement in regard to...

Cristiano Ronaldo opens up about the loss of...